"Canada's Aid to the Allies" 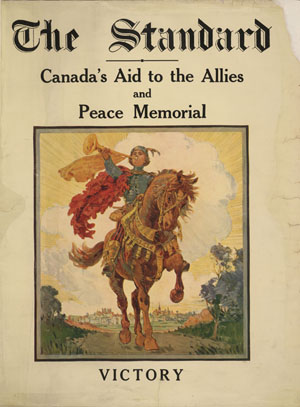 “Canada's Aid to the Allies and Peace Memorial” (ed. Frederic Yorston, Montreal Standard Publishing Company) is a 152 page post-WWI publication focusing on what the various provinces, people, and companies had done to help the Allied cause during World War I. Published in Montreal shortly after the end of World War I in a large magazine-style format (19.5" x 23.5"), the majority of ads are for companies in the Montreal area with a sprinkling of major industries from coast to coast.

The Quebec Family History Society (QFHS) had in their possession a somewhat damaged copy of this amazing document. It had been unidentified, rolled up in a cabinet. The binding was broken in places and some pages were ripped and fragile. The QFHS gave me permission to use the document.  Each of the pages was scanned.  It has since gone missing.

The actual document "Canada's Aid to the Allies and Peace Memorial" has no page numbers. Some of the two-page spreads are intended to be removed and displayed as posters. The loose sections and pages in the possession the QFHS have been arranged following the order of pages in the copy held by Library and Archives Canada. For the sake of clarity and organization, I have assigned a number to each page.

Contents of "Canada's Aid to the Allies"