The Vimy Pilgrimage of 1936, was organized by the Canadian Legion for pilgrims to attend the unveiling of the Canadian National War Memorial by H.M. King Edward of Great Britain, on Sunday, July 26th. Many veterans, widows, nurses and family members were among the travelers who took part in this meaningful pilgrimage to the famous site of the battle of Vimy Ridge.

Jim (JV) Waddell, one of about 6000 Canadian pilgrims, saved a number of items of memorabilia from his trip.

The two following short film clips are from a Pathe Baby film, found in the possession of Jim Waddell.  It was converted to VHS and then DVD. Some of the worst quality images were edited out but the final product is still quite fuzzy and jumpy.

This first segment of film shows one or both destroyers of the Royal Canadian Navy's military escort.  The H.M.C.S. Saguenay left first and the Champlain pulled away second to lead four ocean liners carrying pilgrims toward Quebec City. At Quebec City, the H.M.C.S. Champlain would separate and leave the Saguenay to escort the convoy across the Atlantic.

Sailors can be seen standing at attention on board as the ship passes.

A plane is shown flying overhead.

At the end, the destroyer H.M.C.S. Saguenay passes under the Jacques Cartier bridge.

The segment of film above shows a CPR Duchess with passengers traveling to or from the Vimy Pilgrimage in 1936. Although they appear to be leaving Quebec City heading for the Atlantic, the Duchess of Bedford departed from Montreal on July 17th, a day after the  main contingent left.  Jim Waddell traveled home on the Duchess of York.

The following much higher quality, hour-long film was recorded and edited by F.W. Motton, a fellow Bell Telephone camera club member (as was Jim Waddell).

Starting out on the Vimy Pilgrimage 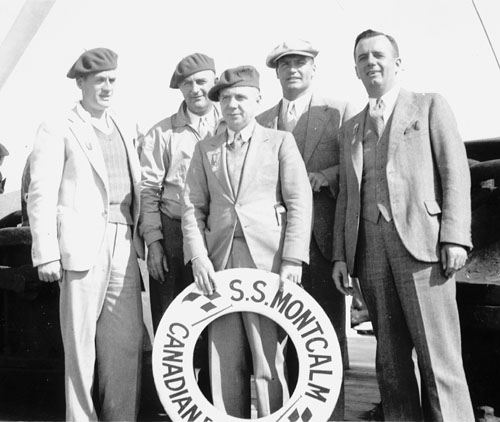 Jim Waddell far left with friends on board S.S. Montcalm

The early morning of the 16th of July, 10 special and three regular trains arrived in Montreal stations carrying the passengers from across Canada who filled the four ships crossing to France.  It took six solid hours for them to embark, all the while accompanied by military bands playing music from World War I, such as: "Mademoiselle from Armentieres", "Hail, hail, the gang's all here", "Colonel Bogey", "There's a silver lining", "It's a long way to Tipperary" and "There's a long, long trail".

Jim Waddell traveled on CPR’s S.S. Montcalm which according to his schedule, was to depart Montreal at 11:30 am on July 16th, 1936, half an hour after the S.S. Montrose.  The Montreal Gazette of July 17, 1936, reported that four ocean liners pulled out of the Port of Montreal at 15 minute intervals starting with the Montrose at 11 a.m. sharp, next the Montcalm, the Antonia and last the Ascania. 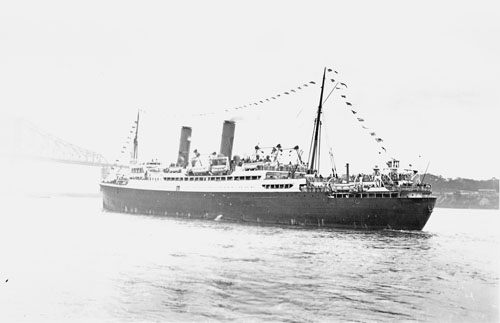 The sailing was said to be "the largest in the history of the port of Montreal, and the greatest from Canada since the early days of the war".

Above: The back and cover image from the CPR's menu card for the Au Revoir dinner onboard the S.S. Montcalm July 23rd, 1936.

The menu for the same Au Revoir dinner with signatures.

Itinerary of the Canadian Legion Pilgrimage to Vimy

Each Pilgrim was issued a Membership Certificate which specified:
-His or her Party and Company,
-The seat number on the train from and returning to Antwerp,
-And accommodations in Armentieres and London.

They received tickets for luncheons on Saturday, July 25th and Monday, July 27th and a luncheon basket on Sunday, July 26th, the day of the unveiling.

There were tickets for seats on Motor Coaches Saturday, Sunday, and Monday.

From July 28th to August 1st, 1936, Vimy Pilgrims took part in activities in London, England. Accomodation was provided at B&B's in the city. Jim (JV) Waddell was to stay at the Harewood Hotel.

The main event in London was the Memorial Parade and Service at the Cenotaph on Wednesday, July 29th, 1936. The Prime Minister, The Right Honourable Stanley Baldwin spoke, welcoming the pilgrims who took part in the parade.

Jim (JV) Waddell was in Party "L" and Company "Y" in the Parade.

S.S. Duchess of York:
Returning from the Vimy Pilgrimage

Some of the Vimy Pilgrims on the returning from England and France. Jim (JV) Waddell is seated on the left side of the bottom step.

Below: The cover of the menu card for the Au Revoir dinner onboard CPR's SS Duchess of York on August 19th, 1936 and beside it the menu.

Go from Vimy Pilgrimage to Unveiling the Vimy Memorial

Return from Vimy Pilgrimage to WW1 and Montreal