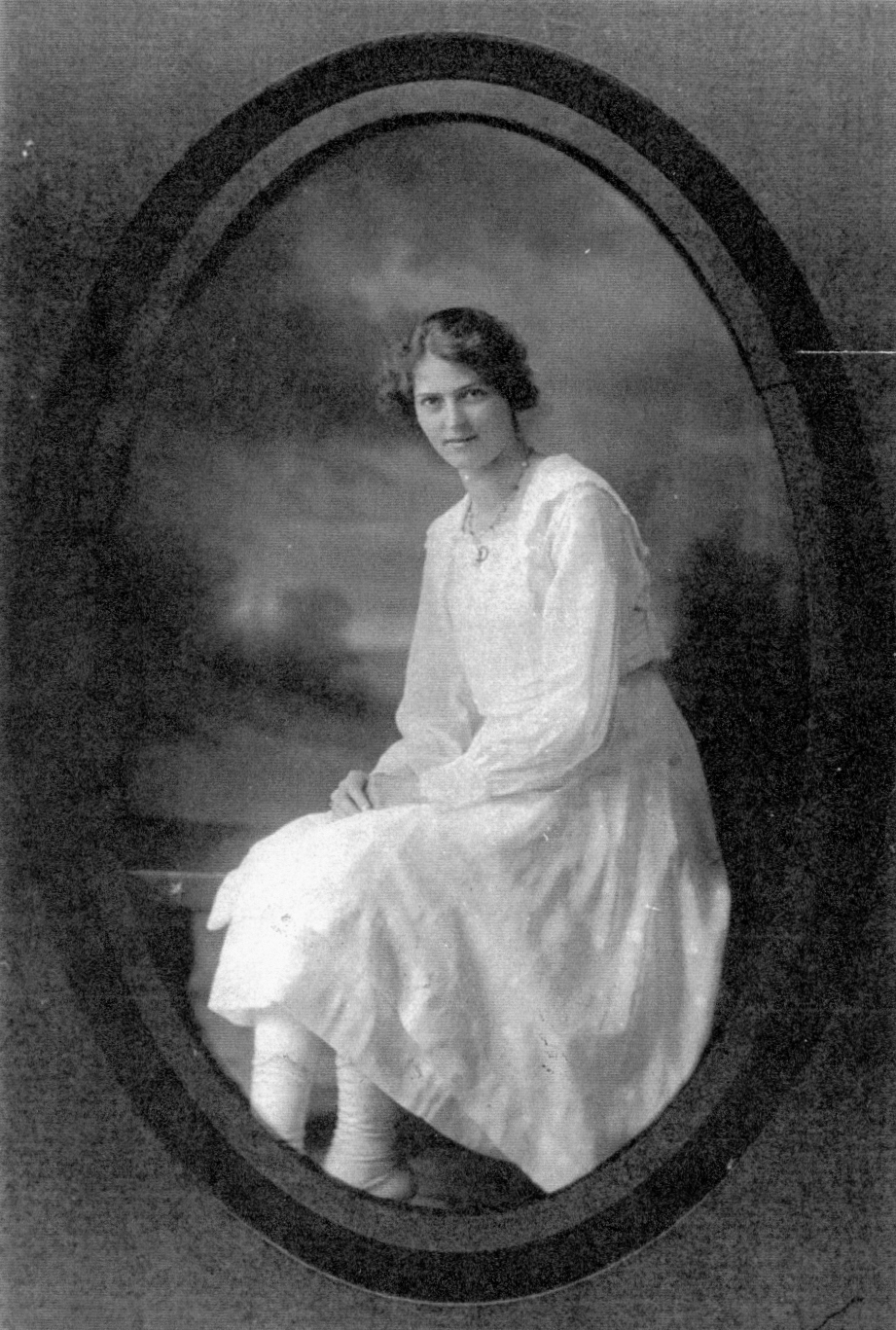 Marie Glazin was confirmed at Church of the Ascension in Montreal on April 28, 1918. Her good friend, Ellen Maud Agnes Shill, was confirmed the same date and place.

With her brother, Walter, and their mother, Emily Glazin, nee Carpenter,  Marie Glazin sailed from Liverpool on the S.S.Laurentic departing on September 17th1 and disembarking in the port of Quebec on September 24th, 1910.2  They would have traveled onward to their final destination, Montreal, by train.

Marie’s father, Walter Sr, had arrived in Montreal ahead of them in early June on the same ship3. In Spring 19114, they were boarding with the family of William E James, at 74 Plymouth Grove, a street immediately south of the Canadian Pacific Railway tracks between Canning St and Seigneurs.  The area no longer exists as it has been paved over beneath the Ville-Marie expressway.

Several stories including Marie Glazin are told in Nell Shill's videotaped interview in 19895.  Also, a taped conversation between Nell and her daughter, Joyce, while looking at a photo album brought to light the stories behind numerous photographs of the two young women6.  Marie Glazin was Nell Shill’s best friend growing up through her teen years and many photographs remain of activities they did together.  They kept in touch their entire lives despite their marriages, family responsibilities and distance.

Nell and Marie finished their schooling by the age of 14 or 15.  Nell talks about one of their first jobs:

They "went to work in a store, selling lingerie, everything. It was a general dry goods store, they called them in those days. They sold everything but food. We got $2.50 a week. and we worked 6 days a week and some nights during the week. $2.50 a week that's what we got. That was 1914, 1915. That's a hundred and some odd dollars a year. So we had very little. But we enjoyed it. We had fun together the two of us." - Nell Shill 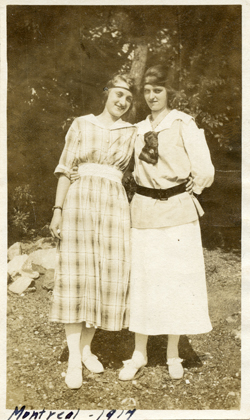 The writing on the photo says "Montreal 1917". Nell Shill is on the left, Marie Glazin on the right.

These same dresses appear in some of the holiday photos and set an approximate date for those trips.  The girls were about 18 years old here.

They were very busy and physically active, despite the clothing.

"And dancing; I was crazy about dancing in those days. It was more ballroom than anything. We did a lot of dancing. Everything so that we could dance with the boys when they came back. Marie and I went and took lessons. She is crazy about dancing even yet. If she were well enough she would dance anywhere." - Nell Shill

Marie and Nell took holidays in the country every summer.  In addition, they went away on the occasional weekend, starting around 1917.  Of course, it would not do to go away unchaperoned, so they traveled with their mothers.  Living downtown Montreal, it was easy to hop on the train to different locations.  Mostly, they seem to have traveled to the Laurentians north of Montreal.  Bevans Lake was a favoured destination.

"I always took my mother on holidays and so did Marie. She took her mother and I took mine. We were the only two in the family that did it. Marie had no sisters, but I was the only one in my family who took my mother with me always. She always went with me, up to the mountains, wherever we went: Phillipsburg, down south, down the other side of the river." - Nell Shill 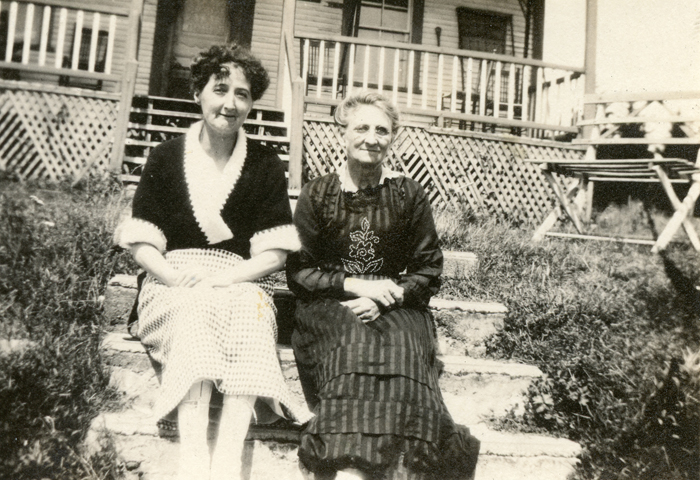 "There's Marie and I and we used to go down the creek in a canoe and sing all the songs.  We were all alone.  Nobody could hear us for sure and the creek went from one lake to the other you know.  Went from Bevans Lake to Round Lake up at Weir." - Nell Shill 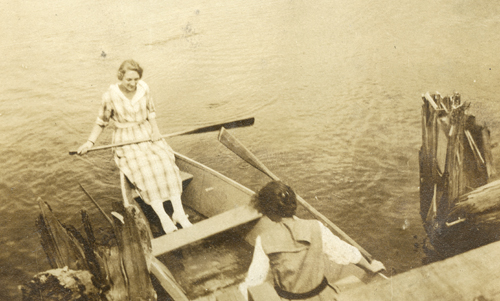 Nell and Marie setting off in a boat. 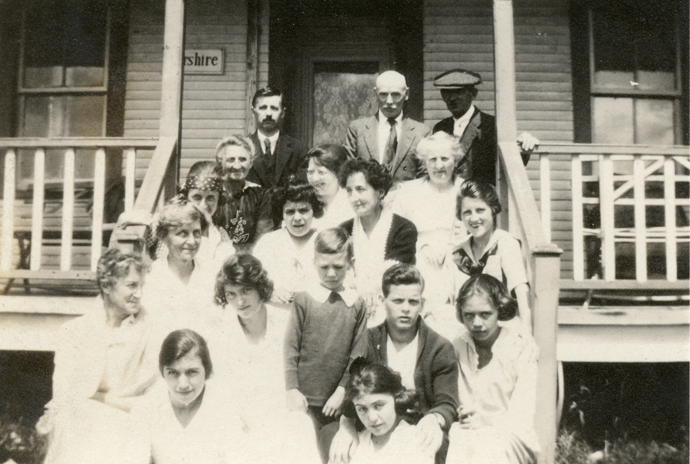 Nell is the second row on the steps, far right. Marie is second from left seated on bottom step. Marie's mother is beside Nell with the black hair. Nell's mother is far left, second from back.

One year Nell, Marie and their mothers went to St. Faustin Station for a holiday.  There were several girls from Nell's work there too.  They would take the train from Montreal.

Although Nell and Marie stayed in touch, the photos and stories about their relationship cover only the period up to Marie's marriage to Henry Alexander Davies in September of 1924.

Nell had one more story about them taking a trip to Scotland together with another friend of Nell's in 1972:

"We went to Scotland and drove the car all around Scotland. Up one side and down the other with Marie and Agnes. Neither one of them drove. I drove all the way.

But Marie didn't read the map or anything, she just went along for the ride. And she had one wish that she never got, ’cause I wouldn't do it. We were up where the Queen goes for church when she's there. She said, "Can't we stay here and go the same church with the Queen?" - Nell Shill

Nell refused to adjust the plans and denied Marie her request.  One wonders whether Marie was terribly disappointed. 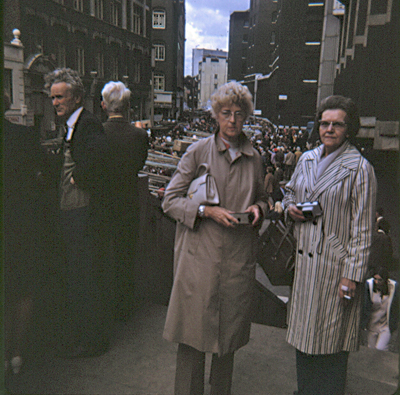 All of the photographs presented here are in my possession and were digitized by me and were created by or held in the possession of my grandmother, Nell Shill.