Reservist in the 6th Hussars

I had always heard that Jim (JV) Waddell had served with the 6th Hussars Reserves  in World War II.  He died in 1965, so I have few personal memories of him and almost everything I know about his experience in World War II comes from my father, Keith.

Having served in the Imperial forces during World War I, in 1939 when the second World War began, he was once again prepared to “do his bit”.  A medical problem from the first war disqualified him for active duty so Jim joined the Reserve Army. 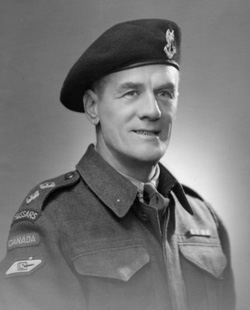 Jim in 1943 after receiving his commission as 2nd Lieutenant in the No. 47 (Cav.) Reserve Company Veterans Guard, a unit of the 6th Hussars.

Jim Waddell joined the 6th Duke of Connaught’s Royal Canadian Hussars (Armored Car), often simply known as the 6th Hussars whose Armory was located just off Dorchester St. West (now Réné Lévesque Blvd.) at 1103 St. Matthew Street, near the top of the embankment.  What is unknown is the date that he joined.  It is possible that he was initially rejected because of his medical problem until the No. 47 (Cav.) Reserve Company Veterans Guard, a unit of the 6th Hussars, was created October 16th, 1940.

Frank Pickerel of the 6th Hussars in a Montreal Gazette article from November 1944 is quoted as saying that the Veterans’ companies were the backbone of the reserve units.  “The youngsters under 18 trained under the ‘eagle eyes’ of the rejuvenated youngsters of 1914-1918”.

As a reconnaissance battalion, the regimental training program for the 6th Hussars included training in rifle, Reising [sub-machine] gun, Bren [light machine] gun, mortar, fieldcraft tactics and the principals of operation and the driving and maintenance of military trucks and motorcycles.  Fieldcraft consisted of map-reading, reconnaissance and signaling.

Returning from summer training camp, Reserve Army units would parade back to their Armoury from where they got off the train or bus, stopping at Dominion Square to salute the officer commanding M.D. 4. 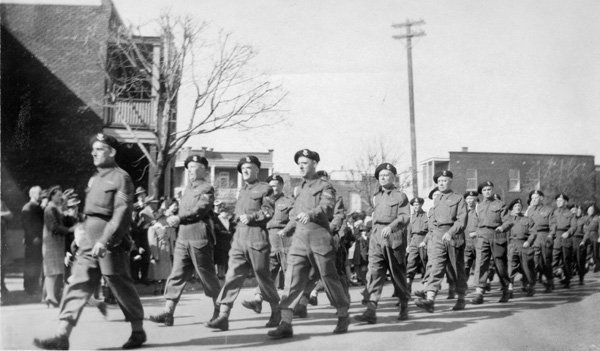 This parade took place before Jim became a 2nd Lieutenant, so sometime between 1939 and summer 1943. Jim is in the middle of the first line of three soldiers. 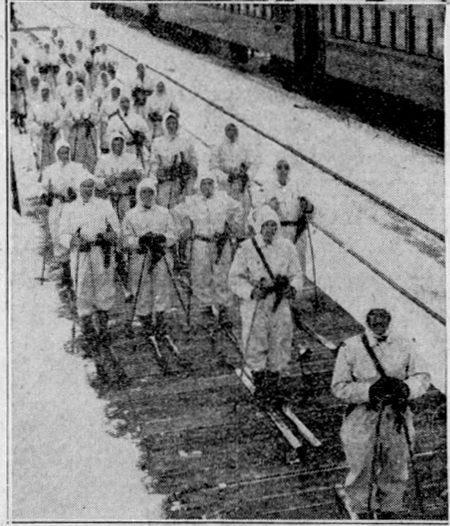 The Gazette (Montreal, Quebec, Quebec, Canada) · 10 Mar 1941, Mon · Page 11 "Members of the 6th Duke of Connaught's Royal Canadian Hussars who travelled north on the week-end for ski manoeuvres. The Patrols form up on the railway station platform before starting out."

I was intrigued by this snippet from my father’s memoirs: “Reserve army training sometimes included manoeuvres on the ski slopes in Shawbridge in the Laurentians.  Gray and I were included occasionally – loaned white coveralls, given a ride in the back of a military “lorry” from Ste-Rose, given a free lift ticket and a quick lunch from the chow truck.”

Searching Newspapers.com turned up two articles with photographs confirming part of his story.  March 10th and 22nd, 1941 The Montreal Gazette carried reports of one of these events: “6th HUSSARS HOLD MANOEVRES ON SKIS: Unit ‘Blows Up’ Railway Bridge At Prévost in the Laurentians”.   More than 40 volunteers from the Hussars participated in the exercise over a weekend.  The men were completely equipped with anti-aircraft weapons, light machine guns, rifles and pistols.  On Day 1 they skied in patrol formation from Montfort to Morin Heights using map references and compass to find their way.  On Day 2, they left Morin Heights, skied to Prévost and “demolished” the railway bridge. Then they continued skiing to Shawbridge to get on the train back to Montreal.

This was the only article discovered talking about ski manoevres, but from Keith’s comment, it seems it might have happened more than once – and that Jim was actively involved.

James Verner Waddell started officers’ training in March of 1943 at the Armory on St. Matthew St.  He was commissioned Second Lieutenant on August 16th, 1943 in the 6th Duke of Connaught’s Royal Canadian Hussars Regiment attached to the No. 47 (Cav.) Reserve Company Veterans Guard of the Canadian Army.  His original commission is in my possession.

This Reserve unit celebrated its anniversary each year and held its last parade October 18 of 1945. As the unit disbanded, they created the 47th Cavalry Reserve Association which would meet regularly and cease to exist on the death of the last member.

Proud to have Served

Frank Pickerel’s article in the Gazette summarizes the pride which the Reservists could claim: “When the war is over they will  hold their heads high for, despite the fact they were not called to actual fighting, they trained those who could go out to fight, and they can proudly say, ‘I was prepared.  I served with Canada’s Reserve Army’ They know…that if Hitler had hit when we were weak, they were prepared to do their duty, as once before, with their 17-year-old buddies.”

Years ago, I contacted Library and Archives Canada to find out if there were a file of my grandfather's activities during the Second World War.  At the time, to the best of my recollection, I was told that Reserve Army files were discarded after a set number of years past the soldier's death.

While preparing this article, I took the chance to contact LAC again and am waiting to hear if there might be a different response.  (Wishful thinking!)  An answer may be delayed due to COVID.

This article was first created for publication in the journal of the Quebec Family History Society's November 2020 edition of "Connections" which is devoted to the 75th Anniversary of the End of WWII.  Minor changes have been made from the original.