JV Waddell was still president of the PAPSB at time of this convention in Fredericton.

J.V. (Jim) Waddell served as the President of the PAPSB (Provincial Association of Protestant School Boards) for the years 1947, 1948 and 1949. With his amusing story-telling and repartee, his seemingly dry speeches would have kept audiences amused.

In 1947 the PAPSB was made up of school boards from all of Quebec outside the cities of Montreal, Quebec City and Sherbrooke.  Its purpose was to “further in every way possible the interest of education in our rural Protestant schools.” In JV Waddell’s address as President in 1949, he expressed the purpose thusly:

“Originally this organization was formed to fight for the rights of the rural boards which did not have a chance to swim in the gravy that appeared to be poured on the sumptuous repasts enjoyed by the city boards.”

But, more could be achieved through united effort and his presidency saw membership in the association increase to include all the Montreal boards and the Sherbrooke board among others.

In the three year period that JV Waddell served as President of the association, themes recurred such as:  the shortage of qualified teachers, poor pay and conditions for teachers, especially in rural areas and the need for isolated schools to unite into Central School Boards in order to make better use of scarce resources.

Speeches and Reports by JV Waddell

This speech JV Waddell, given as incoming President, explains in detail the raison d’etre of the organization, its founding, past accomplishments and lists a number of areas of potential involvement in the future.

September 1947:
Report to of Delegate to CSTA, CEA conventions in Quebec City

CSTA convention:  Delegates from all Provinces except NB and PEI attended and reported on educational progress in their province.  A resolution passed encouraging the exchange of School Trustee magazines between Provincial Associations.  JV Waddell was appointed as one of the five Vice-Presidents of the CSTA.

CEA convention:  This organization, without interfering with the Provincial educational bodies of administration, is giving a lead to and encouraging progress in every aspect of educational welfare for the benefit of pupils, teachers and administrators in Canada.  Mimeographed pamphlets from the Information Bureau are available at the cost of fifty cents per class room.

JV Waddell expresses the Association of Protestant School Board’s awareness of and concern for the various factors contributing to the shortage of qualified teachers, one of the most significant being a low salary scale in Quebec.  Other factors he addresses are: lack of professional contact and isolation in rural districts, insufficient prestige attached to the profession and inadequate teachers’ residences in rural areas. 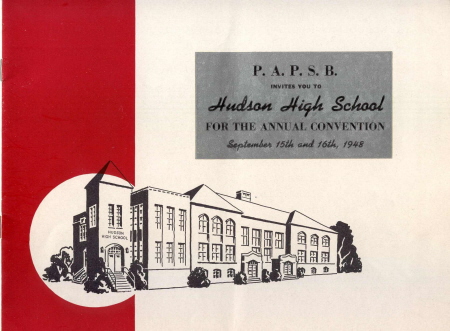 To see the entire booklet for the PAPSB convention in 1948 click here.

In a short statement, JV Waddell lists the Association’s goals for the coming year: introduce a constitution, increase publicity, make useful information available to all members, consider appointing representatives of the Central School Boards to PAPSB executive and strive to have all provincial school boards, large and small, as members.

April 1949: Report for PAPSB newsletter from Delegate to CSTA and CEA conventions in Winnipeg, September 26-30, 1948

Delegates, attending from all Provinces except NB and PEI, presented reports on the educational progress made in his Province during the year.  The delegates revised the constitution and formulated a  programme for the coming year.

The chief purpose of the CSTA is to provide a meeting place for delegates from various Provinces for the exchange of experiences and ideas. Uniformity throughout the Provinces is neither sought nor attainable but there is no question that each profits from the experience of the other.

This convention elected JV Waddell as Vice-President of the CSTA.

September 10-15, 1949:
Report of delegate to CSTA and CEA conventions in Fredericton, NB

Specifically reporting on the CEA, JV Waddell says “The Association is a coordinating agency on educational research in Canada.  It co-operates with other bodies in studies of nation-wide application.  It undertakes research in school health, practical education, teacher supply and training and specific projects for Government Departments and local school boards.”

Studies of interest include, Absenteeism in Schools, Caretaker facilities, and a report of the critical problem of teacher shortage in Canada. JV at this time was  a Director of the CEA.

JV Waddell reports back on progress towards the previous year’s objectives.  In the interest of bettering educational facilities in Quebec common ground can be found with the teacher’s organization and the Quebec Federation of Home and School.  By sending delegates to the CSTA convention these representatives find allies in working towards equality of educational opportunity throughout Canada.

JV Waddell comments on “compulsory retarding of progress” by legislation which re-imposed fees on primary education.

He was honoured to have served for three terms and represented the PAPSB at CSTA conventions.

September 1950:
Letter to the President and Members of the Executive Committee of the PAPSB

JV Waddell, Past President of the PAPSB,  enumerates the advantages of membership in the CSTA and gives examples of suggestions which came out of attending meetings in 1947, 1948 and 1949.

October 1950:
Report of Delegate to CSTA convention in Victoria for PAPSB magazine

JV Waddell summarizes the reports of the attending Provincial Associations across Canada, from BC to Quebec and NS the sole eastern province.  As CSTA President, he expressed his regrets at being unable to complete his two year term.  Dr. Hardy of Toronto replaced him. He hoped a new delegate would be sent to the next convention in Regina.

October 21, 1950:
Letter to Executive Committee or the PAPSB re CSTA, CEA conventions in Victoria

JV Waddell summarized  the two conventions in Victoria he attended with financial assistance in the amount of $323.00 from the Provincial Association.

The CEA quarterly in December will publish copies of addresses made of the 3-day convention.

JV Waddell took part, with Mr. Almond, chairman of the Hudson School Board and President of the PAPSB, Dr. C.N. Crutchfield, and Dr. E.C. Powell, President of the Quebec Federation of Home and School Associations, in a discussion of the benefits of larger school units versus the traditional “little red one-room school house”.

In 1950, Bell Telephone, JV Waddell’s employer, no longer agreed to give Jim time off to attend the functions which his school board/trustee work required.  He was forced to give it up while at the highest point of service in the CSTA.

Return from PAPSB President to School Board Work