During World War I Jim Waddell served in the 11th Army Cyclist Corp and Military Foot Police until the armistice and afterwards with Captain Robert N. Thompson in Namur, Belgium until August 1919. After the war, in 1921, he came to Montreal, Canada and eventually married and settled in the Montreal area.

There are many questions which I would like to have the answers to, but lacking official documentation may never be answered.

Where did he enlist in World War I?

Who did he enlist with?

Where and when was he injured?

Why do we have photos of him in uniform, 1915, 1916 if his Medal Roll entry shows his service from March 3, 1917? Were the photos taken on his first enlistment?  Does the medal card only show his service once he got to a theatre of war?

Enlisting in World War I 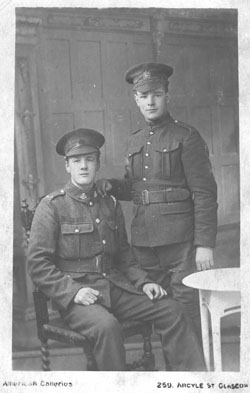 The parts of the story told below in italics were written by his younger son, Keith, in 1991.

"At 15 Jim joined up. An uncle learned of it, told his father and Jim was released, but within a year he tried again. Men were needed but boys would do – and he stayed in the army."

"Perhaps he joined up for the adventure, to fight for the right cause, or to support the underdogs in Europe that the Germans were overrunning. Any of these reasons could have been his motive. Somewhere he had learned that one had to fight for what was right. In later years we noticed that he did not mind speaking out for the underdog – and he had little patience for B.S., being the type who called a spade a spade!"

"Whatever his reasons, Jim joined up to fight the Germans – and did so. He was wounded by shrapnel at some point, recuperated and returned to the front, but he walked with an uneven gait for the rest of his life and frequently had a sore back."

Presumably while a Military Foot Police in World War I, Jim Waddell drew duty guarding P.O.W.'s and learned to speak German quite adequately. His daughter remembers learning to say "Nehmen Sie Ihre Hände aus Ihren Taschen", which means, "Take your hands out of your pockets". Apparently a useful expression while working with P.O.W.'s!

"His knowledge of German was a source of pride and a means to welcome others who must have been particularly vulnerable here in North America between the wars and after World War II. Strange that he later found it almost impossible to learn French."

(although he claimed the ability to speak it on arriving in Canada).

"Perhaps his Scottish accent, which he never completely lost, had been an asset to learning German, while a handicap to French." (Nonetheless, he wasn't shy to use it . We have a recording of him telling a joke in French.)

Another job Jim Waddell had during World War I was sentry duty. He used to tell an amusing story about an encounter he had one night. Three written copies of this story exist, having been submitted to "The Saturday Evening Post" in 1949, "BBC Television" in 1964, and The Reader's Digest, "Humour in Uniform".

His daughter summarizes this story:

While standing sentry duty one cold and rainy night as the transport of munitions went on using mules, Dad reported meeting the most bedraggled, muddy pair of mule and mule skinner. The leader stopped in the muddy road in front of Dad’s post to roll a cigarette. The mule, obviously glad to interrupt its plodding, stopped with its nose close to the mud. The soldier, looked over at the sentry and with a straight face, asked: “’ave you seen the ‘ounds pass this way?" This facetious remark caused Dad to chuckle for the rest of his shift – and was shared after with others in his unit.

Three written versions of this story exist written by Jim.

Jim Waddell's medal card shows his regimental numbers for both the Army Cyclist Corps and the Military Foot Police (M.F.P.):

Then, looking at the Military Foot Police Regiment or Corps listing in the Medal Roll for World War I, page 1051, Jim Waddell's record shows: