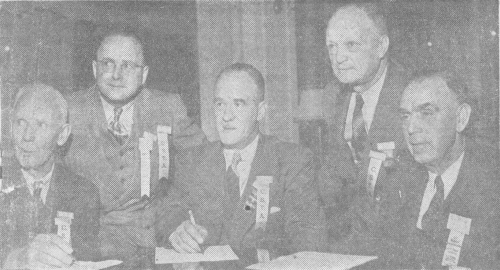 This image of the CSTA executive was taken at the Victoria, BC convention in 1950

What is the CSTA?

The CSTA, or Canadian School Trustees Association, was a national organization whose purpose JV Waddell stated as follows:

“Believing that the children of Canada are its greatest assets and that therefore Canadians everywhere are in solemn duty bound to do everything in their power to provide for their education and rightful upbringing, the Canadian School Trustees Association is constituted to study and work out the best possible means to achieve this great purpose.”

The association's conventions provided the opportunity for Provincial Trustees organizations to exchange views on matters of common interest.

PAPSB delegates to the CSTA convention 1947

At the PAPSB meeting in Lennoxville, Quebec, in the Spring of 1947, Mr. Whitehead and JV  Waddell were appointed as delegates to the Canadian Education Association Convention taking place in Quebec City in September that same year.  The CSTA and CEA conventions were regularly scheduled one after the other to enable more people to attend both.

After attending these two conventions, JV Waddell recommended that the PAPSB continue to ally themselves with both the Canadian School Trustees Association and the Canadian Education Association because as he said, “we can assist our progress by being better informed as to what goes on beyond our boundaries in an educational way.  Knowledge is power and the more we know the more we can further our cause.”

JV Waddell was appointed a Vice President of the CSTA at this first meeting and continued in that position until becoming President in 1949.  The term for President was 2 years, but due to limitations imposed on him by his employer, Bell Canada, JV was obliged to step down at the end of his first year.

Speeches and Reports by JV Waddell

In his role as President of the Canadian School Trustees' Association JV Waddell was once again called upon to give speeches and write reports of the various conventions and meetings he attended.

“The main object of our Association is to provide a medium where Trustee delegates may have the opportunity to discuss matters of common interest.  Although the Association was formed in 1923 its effectiveness was limited for some time by the dearth of that important commodity – so common to all school boards – funds.”

The CSTA initiated resolutions on problems affecting teachers across Canada, forwarding a copy of these to every member of the House of Commons.  The Association offers to cooperate with any Federal organization, such as the CTF, working in the interests of education.

1949, August 10th, 11th,  Ottawa - Report of the Delegate to the Convention of the Canadian Teachers’ Federation

The most important issue discussed was Federal Aid for Education.  Representatives of various Quebec organizations were in attendance.

JV Waddell, in addressing four Ontario Trustees’ Associations exhorts them to join forces to be more effective.  He hoped that these groups would “help us in our endeavours to develop into a strong National body in order that we can present the case for education for all Canada to the Government of the day.”

1950, July 20:  Letter to Secretary of State regarding a Resolution from CSTA convention, Winnipeg 1948

Canadian School Trustees' Association approached the Federal Government for funds to further their work as they are national in scope despite education being a provincial responsibility.

Progress towards the aims of the association included a resolution on Federal Aid to Education being introduced in the House of Commons.  JV Waddell helped plan the programme for Canadian Education Week on invitation from  the Canadian Teacher’s Federation.  Contacts were maintained and information disseminated.

Various directions for future action are suggested.  Suggests the advent of television as a subject of discussion at the convention.

Return from CSTA President to School Board Work