Unveiling Vimy Memorial was the highlight of the Vimy Pilgrimage attended by Jim (JV) Waddell. Amongst the memorabilia he hung onto from the trip, newspaper sections from "The Daily Sketch" and "The Daily Telegraph" report on the Vimy Memorial's unveiling on July 27th, 1936 with photos and stories.

King Edward presided over the unveiling ceremonies at the Vimy Memorial and spoke with the pilgrims.

The Daily Sketch supplement on the unveiling consisted of an 8-page section titled: "Special Vimy Memorial Section with short reports and photographs."

The Daily Telegraph offered a 16-page Pictorial Supplement with captions reporting on the "King’s Tribute to Canadian Valour on Vimy Ridge". Various photos taken at the Vimy Memorial's unveiling show King Edward and views of the ceremonies.

“THE WARRIOR SLEEPS AMONG HIS PEERS”

“All’s well, for over there among his peers a happy warrior sleeps,” the King quoted – from the inscription at the Memorial Chamber in Ottawa – as he unveiled the commanding monument at Vimy Ridge yesterday.  “These words,” he said, “reveal the inner meaning of what we do to-day…”
His moving oration was heard in all parts of the Empire and in every British home…”.

The picture shows the King on the dais making his speech.  He was standing close to the great symbolical figure representing Canada’s sorrow.  This close view reveals the figure in all its deeply impressive beauty, “the inspired expression in stone of Canada’s salute to her fallen sons.”

She faces the battlefield of Vimy, which, twenty years ago, was pitted with shell craters, and is for ever hallowed by the blood of Canadian heroes.  To-day green fields have covered the scars of war. 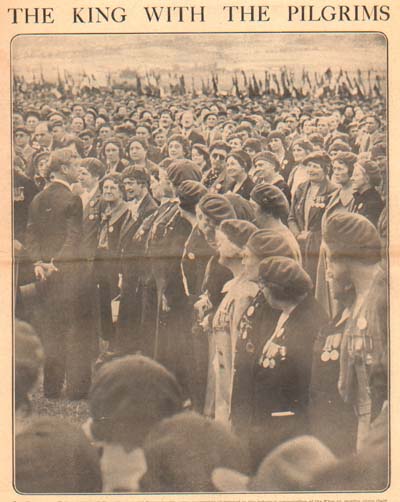 Canadian women pilgrims massed at the vast memorial listened with every expression of interest to the informal conversation of the King as, moving along their ranks, he drew from them by his unaffected manner stories of the heroes whose loss had brought them on their long journey of pious affection.

The King with the pilgrims dipping the standards

An impressive DAILY SKETCH general view from the grass bank beside the great memorial during the actual ceremony of unveiling. Legionnaires are seen facing the pylons dipping their standards, while behind are the crowds of pilgrims. In the foreground are some of the many beautiful wreaths.

SALUTING THE RIDGE THAT IS FOR EVER CANADA

Banks of white could rolling majestically by in the afternoon sunshine make a fitting setting for this comprehensive view of yesterday’s ceremony on Vimy Ridge. The gleaming white pylons, twin beacons symbolizing Canada and France, dominate the memorial. Over them a squadron of British ‘planes are dipping in salute. The allegorical figure of Canada brooding over her fallen sons was draped with the Union Jack when this picture was taken. Surrounding the memorial is the throng of Dominion pilgrims standing on the Ridge, which Canada won in 1917 and still holds to-day. For the ground is now, by the gift of France, for ever Canadian soil.

The King among Canadian ex-Servicemen and behind him one of the magnificent groups of statuary on the Memorial. This represents the Broken Sword. Talking to his Majesty is Colonel D. McIntyre, who is in charge of the Canadian party. On the left in front is Brigadier-General Alexander Ross, president of the Canadian Legion, and on the extreme right Mr. P. Roy, Canadian High Commissioner in Paris.

THE MEMORABLE SCENE AT VIMY RIDGE AS THE AIRMAN SAW IT

An aerial view of the scene at Vimy yesterday showing part of the multitude surrounding the Memorial on the historic Ridge.

The great throng included thousands of pilgrims from Canada, many of them relatives of the men who laid down their lives to win the Ridge for the Allies nearly twenty years ago.

Right: You see the King among some of the pilgrims. He shook hands with the widows and mothers, and had many talks with war-wounded men before he unveiled the Memorial.

Vimy of 1917 (right) and Vimy of 1936. The large picture, taken from the air yesterday, show parties of pilgrims exploring the British and German front line trenches as they still remain remarkably preserved in all their intricacy.

The other picture is a Canadian official photograph showing Dominion troops searching enemy trenches which they had just taken for parties of Germans who might still be in hiding. It is typical of the vast desolation which constituted a battlefield of the Great War.

The women pilgrims yesterday were frankly amazed at the cunning displayed in the construction of these great trench systems.

The former soldiers explained almost with the pride of possession how the numerous “twists” and “turns” so cleverly arranged sheltered them from the exploding shells.

The following are headlines and partial captions from the 16-page Pictorial Supplement to the July 27th edition of the newspaper.

The King’s Tribute to Canadian Valour on Vimy Ridge

His Majesty passing a guard of honour with double pylons of Vimy Memorial in background.

Unveiling a memorial to the Gallant dead

General view of Vimy Ridge Memorial and part of crowd during unveiling; inset, Flag falling from the mourning figure of Canada.

The King’s Part in the Pilgrimage

King Edward arriving for the ceremonies; The King inspecting the memorial while waiting for President Lebrun of France.

“Splendour of our Comrades’ Sacrifice”

King during the unveiling ceremony; The King with ex-Service men; Inscribing the names of the missing; “Breaking of the Sword” sculpture group.

Sympathy with the widows of the fallen

The King talking to Canadian war widows; The King with the officer in command of a squadron of Spahis; King talking with ex-Service men.

Where the Canadians assaulted the Ridge

Pipers again lead marching men in Arras Canadians lay a wreath on the war memorial at Lille; Canadian Guard of Honour arriving in Arras square; Canadian and French soldiers linking arms; Piper William Brand who piped the Canadians over the top at Vimy during the war.

A side view of the scene on Vimy Ridge; King receiving French President; King with Canadian ex-servicemen; two pictures of the King making his way to the dais on the memorial.

Menin Gate: The Defenders of the Salient

Lighthouse of Remembrance by Vimy

Guardianship of the Straits

Foreign fields that are for ever England

The unveiling of the Memorial Chapel at Jerusalem, May 7, 1927
The memorial at Doiran, unveiled September 25, 1926
Cape Helles and Lone Pine cemetery in Gallipoli
The Mesopotamia War Memorial at Basra, Iraq, unveiled March 27, 1929.