The third and final group of the Shill-Bartholomew family to immigrate to Montreal, Canada arrived on the S.S. Kensington, a ship of the Dominion Line. Ellen Mary, the mother, brought over Marion, Annie, Bert, Grace and the youngest, Ellen (Nell).

Ellen Mary and her children boarded the ship in Liverpool and arrived in Halifax on April 6th, 1908 at approximately 2:30 in the afternoon. Passengers in steerage were examined by both a Medical and a Civil Examiner between 4:45 and midnight. After the examinations were completed, they traveled onward to Montreal on April 7th on the Intercolonial Railway, leaving at 12:45 am. Only 52 others of the total 1083 passengers on board the ship traveled on to Montreal with them. The majority of passengers travelled from Halifax on the Canadian Pacific Railway or the Grand Trunk Railway.

Nell's Memory of Coming to Canada:

Mother brought the rest of us over. I don't remember what boat we came over on. That would have been 1908. It was a passenger boat, but it was not posh by any means. We would be in the Steerage. We didn't have the money to come. I don't know how, but it was paid by the Salvation Army and then you had to pay them back.

We had to go into rooms for a while until we got a flat, and gathered up a little bit of furniture and we were off and running. I was 9 years old. I don't remember too much of the crossing, because I was the youngest and I just went with the rest. The youngest travels behind.

The following table shows passengers' countries of birth. Unlike the previous two ships the family members traveled on, the passengers on the S.S. Kensington in April 1908 were almost exclusively born in England.

The Kensington carried no more that 16 US-bound passengers. Of those, 10 originated in England and 2 in Canada. One passenger born in the US returned home and 3 Russians represented a miniscule non-English contingent. 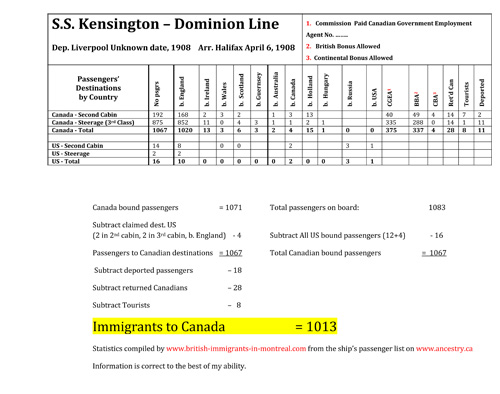 Click on the above image to see a larger view

Almost all of the passengers on the Kensingtonin April 1908 (1067 or 98.5%) headed for Canadian destinations.

The following pie chart shows the relative numbers of passengers destined for each Canadian province. You may notice a large number of passengers of unknown destination. Most pages on this manifest are damaged on the bottom right side making the destinations of some passengers illegible. 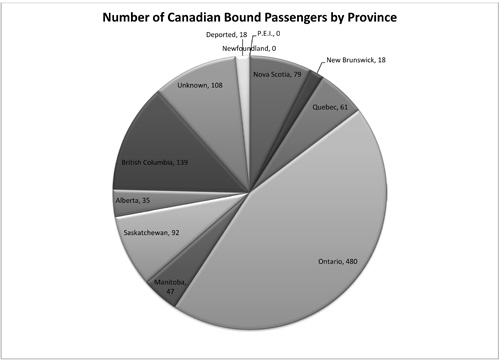 The following is a list of the passengers of British origin who gave Montreal as their destination:

Return to Home Page Go from S.S. Kensington to By Ship to Montreal