Immigrants to Canada began arriving in Quebec on transatlantic liners when the great St. Lawrence River opened to navigation each year.  Researching a selection of years between 1893 and 1921, the first ocean liners arrived in Quebec between 26 April1,2 and 1 May3.  The majority of passengers disembarked and traveled by train from Quebec City, heading for Western Canada3.

In the spring of 1921, a series of articles on the immigrant experience written by Frank Yeigh was published in newspapers in Canada.  On 28 May in the Globe4  [Toronto], the first of the series described what it was like for the newcomers arriving in Quebec off three CPOS ocean liners, the Corsican, the Tunisian and the Melita, all of which arrived in one day.

Might it have been similar for my grandfather who arrived in Halifax in December of that same year?

Arriving in Quebec by Ship 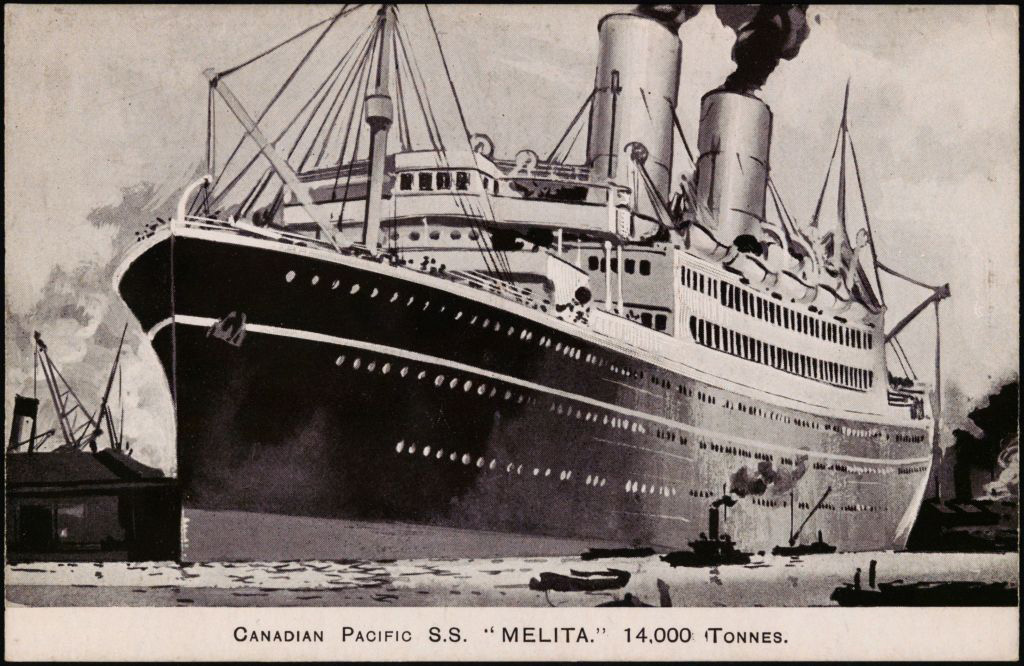 THE HUMAN INFLOW INTO CANADA

(Special Correspondence of The Globe.)
by FRANK YEIGH

Quebec, May 26 – I am viewing a significant site from an historic spot: the site of a procession of three ocean liners as seen from the Dufferin Terrace, in Old Quebec; three stately vessels rounding the Levis Point, one by one, each laden with hundreds of newcomers to this relatively new land of ours.

Nearly 2000 will thus be added to the population of the Dominion within a few hours.  How many are two thousand?  More than two thousand in the mass, a mere total comprised into words.  They are twenty hundreds, twice a hundred tens.  Lined up in single file, like soldiers on a parade, and given three feet of space to each, they would make a line of humanity a mile long.  They would make a good-sized town; they would fill the largest church or hall in most communities; they required, later in the day, half a dozen trains of many dozen coaches to carry them to their widely scattered destinations.

“… A new-found world,
The same that bold, Columbus thrilled,
When the seas blues roll unfurl’d.
And he saw his dreams fulfilled.

O, the first glad glimpse of green!
O, the skiffs on the lagoon!
O, the little towns, serene.
Up the Lawrence tide at noon!

Like a miniature Tyre
Dawned each harbor on the view;
Lighthouse, cottage, tree and spire –
That’s a bit at England, too.”

So he – and they – reach this Old England in New Canada: this Britain of the West, at its historic portal of Old Quebec.  A dozen transatlantic liners have brought their decks full of human freight to this one gateway since the first boat sailed up the river on 30 April last, averaging 1000 souls each.  Thus, the tide of humanity is setting in Canadaward again, as it did last season, when the total of new arrivals reached nearly 150,000 – enough to make a city as large as Quebec, two of Halifax, more than enough to populate an Ottawa or a Hamilton, and nearly enough to set up another Winnipeg.  Three such annual additions would provide sufficient to create another Toronto.

Thus they come and are coming, despite stiffened regulations and closer inspections, for this new Canadian undergoes enough examinations during his trip to last him the rest of his days.  No wonder they smiled the broadest of smiles, from ear to ear, when the final stamp of approval was put on their documents by the last Government Inspector, and they were free to seek and find their niche in a country a continent wide.

It must’ve been a truly great adventure to them all.  I imagine it must’ve been so to the little lassie from Denmark, guarding her bundles and journeying all by herself on the strength of the single word, “Vinnipeg.”  It’s a long way from Espjerg to “Vinnipeg” when you come to think of it, or for Petrus Emericus and Philomer Ladovicus Hofman from Czecho-Slovakia as they produced 40,000 marks, reducible to $100 of Canadian currency.

With what eyes is the Italian girl gazing upon her country-to-be?  Intensely dark eyes they are, piercing and searching and always alert.  The Jewish teacher from Roumania has the bearing and mien of the scholar, several degrees in status above the family of Polish Jews that includes the seven ages of man – and woman.  Watch this Little Mother from Russia, keeping her numerous brood within arm’s length.  How does Canada look to her?  Or to the group of Swiss Protestants, who are grave and solemn and yet unruffled?

He who can look unmoved upon this human stream as it descends the long gang-planks of the trio of steamers, only to ascend the covered way to the Immigration Hall, must be callous and heartless indeed.  Put yourself in their place, as Corsican and Tunisian and Melita release their human cargoes, a procession of prospective citizens representing every conceivable type of humanity and carrying every conceivable kind of receptacle. 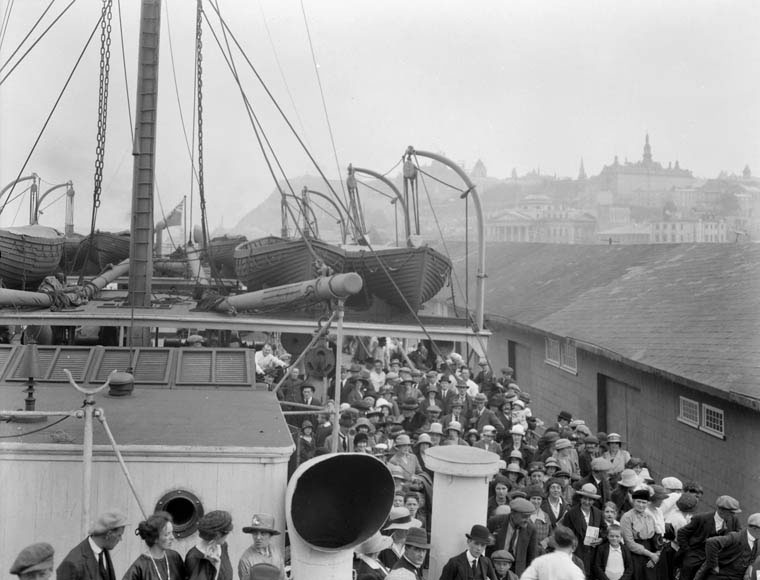 Where are you going to little lady from the other side of the English Channel, and from one of the new Little Lands created by the League of Nations?  “North America” is the sweeping and comprehensive reply.  Keep on putting yourself in their place as you stand by the companionway, or in the big hall, in the place, for instance, of this Scottish soldier-widow, with a Sunday school of 10 offspring (all boys), facing a new world, new faces, a new life and new problems, with a quiet poise that quieted other restless folks.  If we native-born Canadians had a mere share of the pluck of this brave little mother from Ayrshire, with the unafraid heart, we would make Canada all over.

So they pour in, so they keep on pouring in.  Is there no end to the procession?  They make the map of Europe in motion, the Old World linking up with the New.  The moment they pass the last turnstile they are partners in citizenship; they are potentially among the makers of the Canada-to-be.

“We couldn’t get any better ones,” were among the comments of the experienced officers, some of whom had have watched hundreds of thousands enter through this and other ports.  Well set-up, sturdy and brawny, and of a standard of physical fitness to enable them to pass the medical examinations on both sides of the Atlantic, they should make good in their new home.

One must needs pay a tribute to the Government staff, under the Dominion Immigration Agent, Mr. E.  J.  O’Connell, for the efficiency of their service.  It is a trying ordeal to handle three shiploads of immigrants in a day.  It means long hours and exacting duties, for they are dealing with human units, and not with packages and bales of merchandise.

It is intensely interesting to follow the immigrant step-by-step, from his medical examination at the quarantine station at Grosse  Isle to the checking-up processes at the Quebec Immigration Hall.  The in rushing crowd is assorted into sections in the huge upstairs room – first, returning Canadians, then those going to the United States via Canada, or arrivals from the British Isles, and finally those who come from foreign lands.  Lines are formed in single file that pass before the doctors appointed by the Medical Health Department of the Government, and provision is made for second examinations and treatment if necessary.  A corps of trained inspectors next pass on each individual, based on the civil departmental regulations, ascertaining the money in their possession, the correctness of their papers and passports, and their satisfactory replies to questions.  Interpreters are utilized to help in the process and accomplished linguists they need to be to meet all the language demands.

Rooms are set apart for the detention cases, which are dealt with by a board of inquiry of three members, and from whose decision there is an appeal to Ottawa.  Not only is great care taken to admit none but those entitled, but full opportunity is afforded all to have their cases reviewed.  It is satisfactory to learn that the proportion of those requiring to be deported is steadily lessening, thanks to the fuller cooperation of overseas agents and steamship companies.

The handling of the enormous mass of baggage is well done, concurrently with the inspections, but even then a bewildering array of hand baggage is carried, every member of the family being requisitioned for the purpose.  The ground floor of the hall is a busy scene later on in the day.  Money changers, railway ticket sellers and telegraph operators are more than busy. 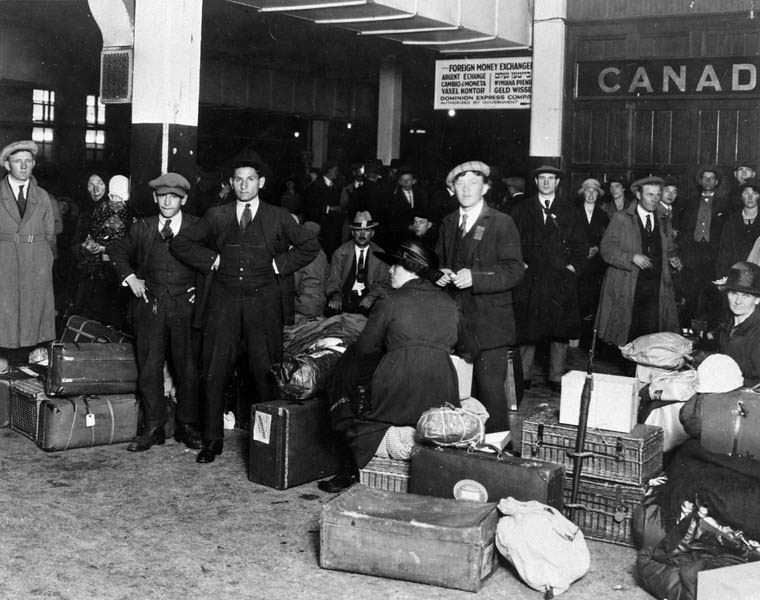 Cafeterias and dining-rooms afford eating accommodation at reasonable prices, and several church and philanthropic agencies have representatives hard at work.  Four of the Protestant denominations – Presbyterian, Methodist, Baptist and Congregational – have a port chaplain, as have the Church of England, the Catholic Church and the Salvation Army.  The YMCA and YWCA aid in this valuable personal service that means so much to the comfort and peace of mind of the bewildered newcomer.  A Mother-in-Israel gives the Bible or Gospel to all who will accept a copy, and the fact that she carries a stock of the Canadian Bible Society in nearly 40 languages and tongues illustrates the “melting pot of the nations” phrase.  The Jewish Immigration Aid Society of Canada looks after its people, and there are many of them; the Governments of Ontario and Quebec are also represented, and that Dominion Department of Colonization and Immigration have special agents overseeing the work generally with trained women officials looking after their sex.

Finally, there is the Red Cross with its unique immigration nursery, but that is another story, along with an account of the baby and boy immigrants and the entraining processes, and the geographical distribution of these hosts of new Canadians – the strangers within our gates.  If we treat them as well as the old Hebrew injunctions of the earliest migrations, we shall do well – and there is every evidence that we are fulfilling in a larger degree than ever before the ancient law. 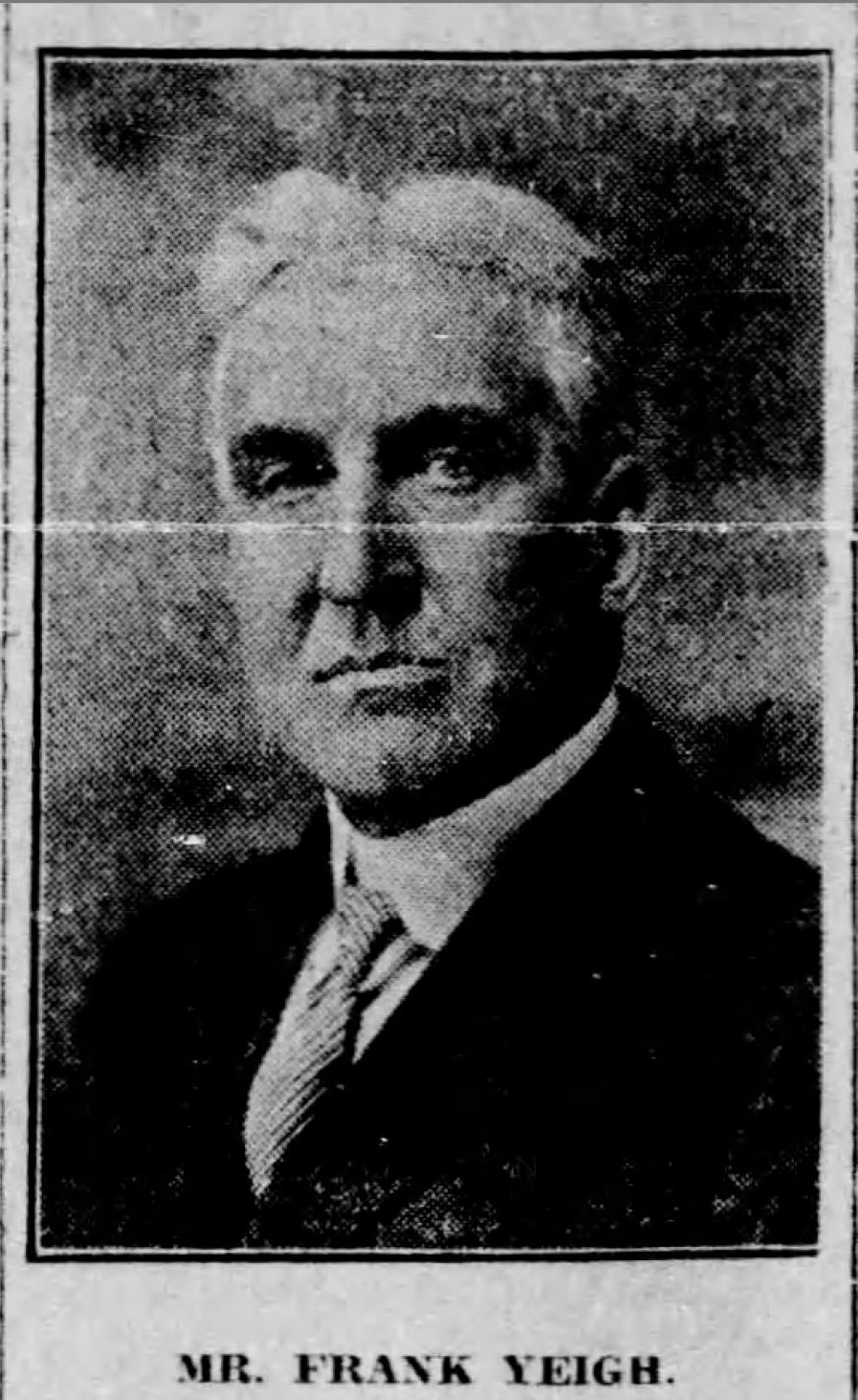 This image of Frank Yeigh appeared in the Ottawa Citizen on May 4, 19225.  He had presented a lecture on behalf of the Presbyterian Church about their missions in Canada with a special focus on the immigrants of many origins who have settled across the country.

Frank Yeigh was born in Burford, Ontario6 in 18607 and died in Toronto, October 25th, 1935 at the age of 758.  Among other accomplishments, he was recognized as an authority in Canadian history and immigration.  He spoke of "foreign" (non-British) immigrants in positive terms.

Over the years, he published 32 editions of "5000 Facts about Canada", the last coming out in Februay 193513.  After his death, the book continued to be published until at least 194914.Another of his publications "Through the Heart of Canada" can be read online.

Read an overview of traveling by Ship across the Atlantic