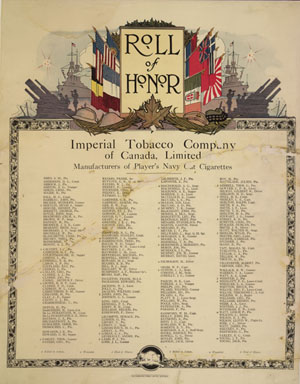 The Roll of Honor of the Imperial Tobacco Company is of special interest to me as my Great Uncle, Herbert (Bert) Shill, who was working there at the time he enlisted in World War I, is found on the list. He is shown to have been killed in action although he died in an accident. (click here to read eye-witness accounts of his motorcycle accident) .

The Only Colour Honour Roll

The Imperial Tobacco Company of Canada Limited's Honor Roll was printed on the inside back cover of the publication "Canada's Aid to the Allies and Peace Memorial." It is the only Honor Roll in the publication that appears in color.