The Hydraulic Machinery Co., Ltd first appears on the Montreal scene in 1917.  The Lovell's Montreal Directory for 1917-19181 has this entry for the company:

Tansley is a street that today runs perpendicular below the Jacques Cartier Bridge. Looking at Google Maps today, the location is not discernable.

The Hydraulic Machinery Co. name was first published in the Montreal Gazette newspaper in relation to contributions made to various funds:  $250 to the Y.M.C.A. Overseas Fund in June2; in December, several employees subscribed to $1050 worth of Victory Loans3.  In 1918, the The Montreal General Hospital Emergency Campaign benefited from a donation4.

Newspaper articles about the company are rare.  At his death in 1960, A.E.G. (Alfred Edmund Guy) Madley's obituary states he was the "founder and former president of Hydraulic Machinery Company Limited".  When he retired in 1958, he had been "associated for more than 50 years in the manufacture of capital equipment for the pulp and paper, plastic and rubber industries."5   Before founding the company, he had also been Secretary-Treasurer of Laurie Engine and Machine Co., Limited at least during 19076 and 19087.

J.W. (James Wallace) Fairfield, secretary-treasurer was the brother of Madley's wife, May Alexandra Fairfield.  He worked for the Hydraulic Machinery Co. all his life8.  While still appearing in the Lovell's Directory of Montreal as the company's secretary-treasurer, he also enlisted in World War I on 19 August 1918 being discharged on June 12, 19199.  He served with "the Canadian Signals Corps on an Expeditionary Force into Siberia"10 for which he appears on this Honor Roll.

Another long-time employee of the company was J. Herman Slater who died in 1937.  His obituary gives more information on the origins of the company:  he "came to Montreal in 1906 as production manager of the [Boomer & Boschert Press] company's local branch.  He retained that position in 1917, when the company was absorbed by the Hydraulic Machinery Co., of which concern he was vice-president at the time of his death."10

Philip St. John Burleigh Copeland enlisted for service the 21st of September 1914. He was a L/Cpl with the Royal Montreal Regiment, 14th Battalion.  He traveled with the first contingent on the SS Andania [as did Herbert Edward Shill].  He was discharged the 30th of November 1917, as medically unfit due to endo- and myo-carditis.11

He worked as a Machinist in 1914, rising to Draftsman by 1921 and by the time of his death in 1929, Draughtsman Engineer at Dominion Engineering Company.

Philip St. John Burleigh Copeland died young due to a drowning accident.  The Gazette newspaper in Montreal carried the following article with the results of the Coroner's Inquest17. 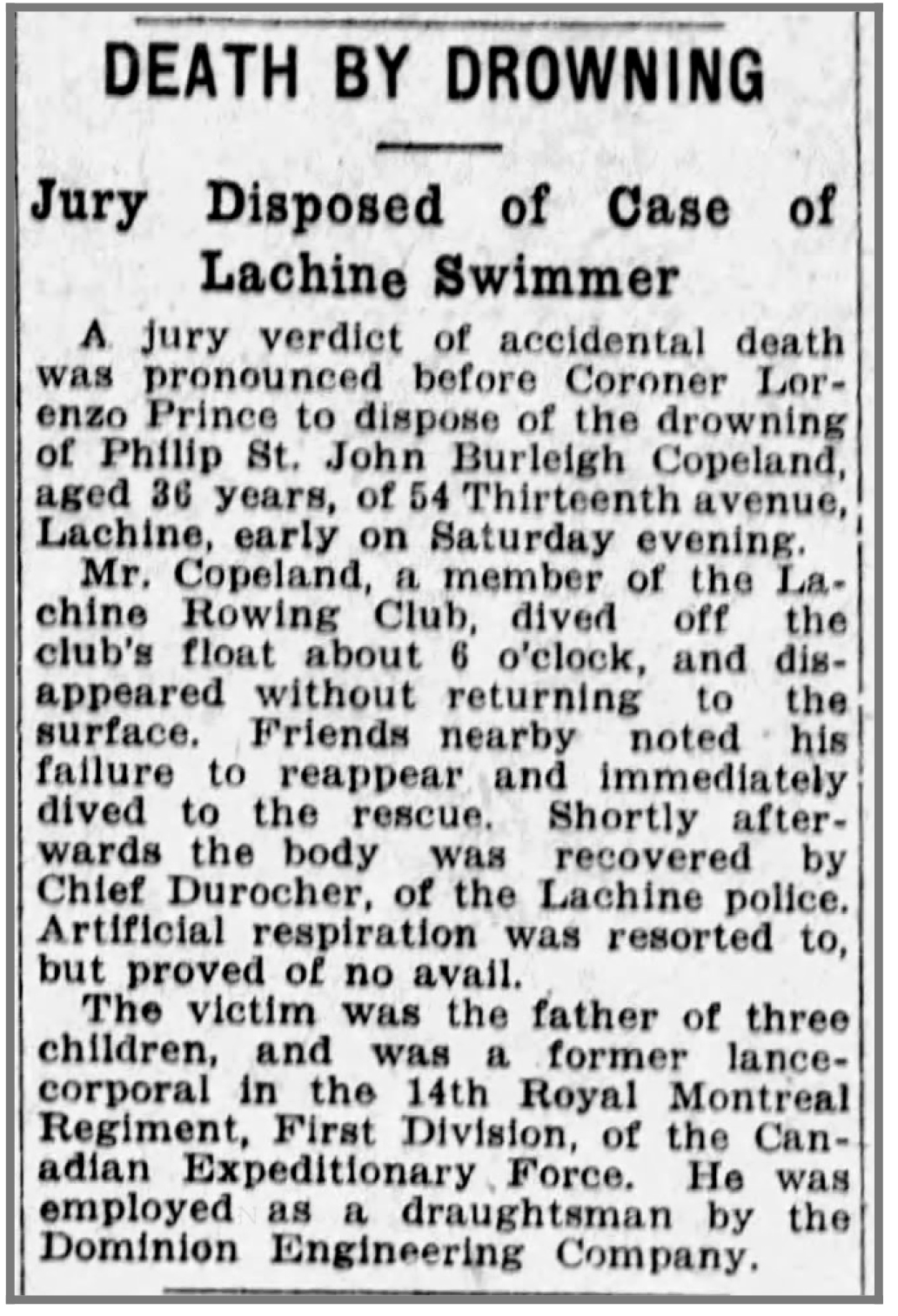 Alexander McKeown Larkin enlisted to serve in World War I with the 2nd Heavy Battery Ammunition Column on the 13th of November, 1914.  An ingrown toe nail gave him trouble and eventually he was shipped back to Canada and discharged on the 20th of November 191618.

Although not on the honor roll, Geo. W. Mitchell23 was a "buyer for many year for the Hydraulic Machinery Company". Born in South Shields, England, he came to Montreal about 1890 and soon became associated with the Laurie Engineering Company, presumably where he first met A.E.G. Madley.