"Jim was at his best when at a party of his peers. Somewhere along the line he learned to play piano by ear. Few who knew him had not heard Jimmy at the piano, playing whatever anyone could hum or whistle, and leading sing-songs of W.W.I. songs, Christmas Carols, or “auld” Scottish songs like "Paddy McGinty’s Goat". The family still has a 78 recording he made while on holiday in New York City about 1950 reciting "The Goalkeeper’s Ghost" and a comical story in French. He loved to give of himself and cheer others up."
- Keith Waddell

Jim would have likely lead sing-songs of the typical World War I songs both during and after the war.  In his collection he had two song sheets (no music) created by Canadian Legion War Services of the British Empire Service League.  One was undated and the second one was edition No. 5, dated 1942 . Both had the words to 54 songs.  Many songs appeared on both lists: Abide with Me; Beer Barrel Polka; Carry me Back to Old Virginny; Down by the Old Mill Stream; East Side, West Side; Fight the Good Fight; Keep the Home Fires Burning; Let the Rest of the World Go By; Nearer my God to Thee; O Canada; O God our Help in Ages Past; Oh! It's a Lovely War; Onward Christian Soldiers; Pack up Your Troubles; Perfect Day; Roamin' in the Gloamin'; There are Smiles; There's a Long, Long Trail; Till We Meet Again; Tipperary; When I Grow too Old to Dream.   You can see that something was spilt on them - perhaps a glass of beer! 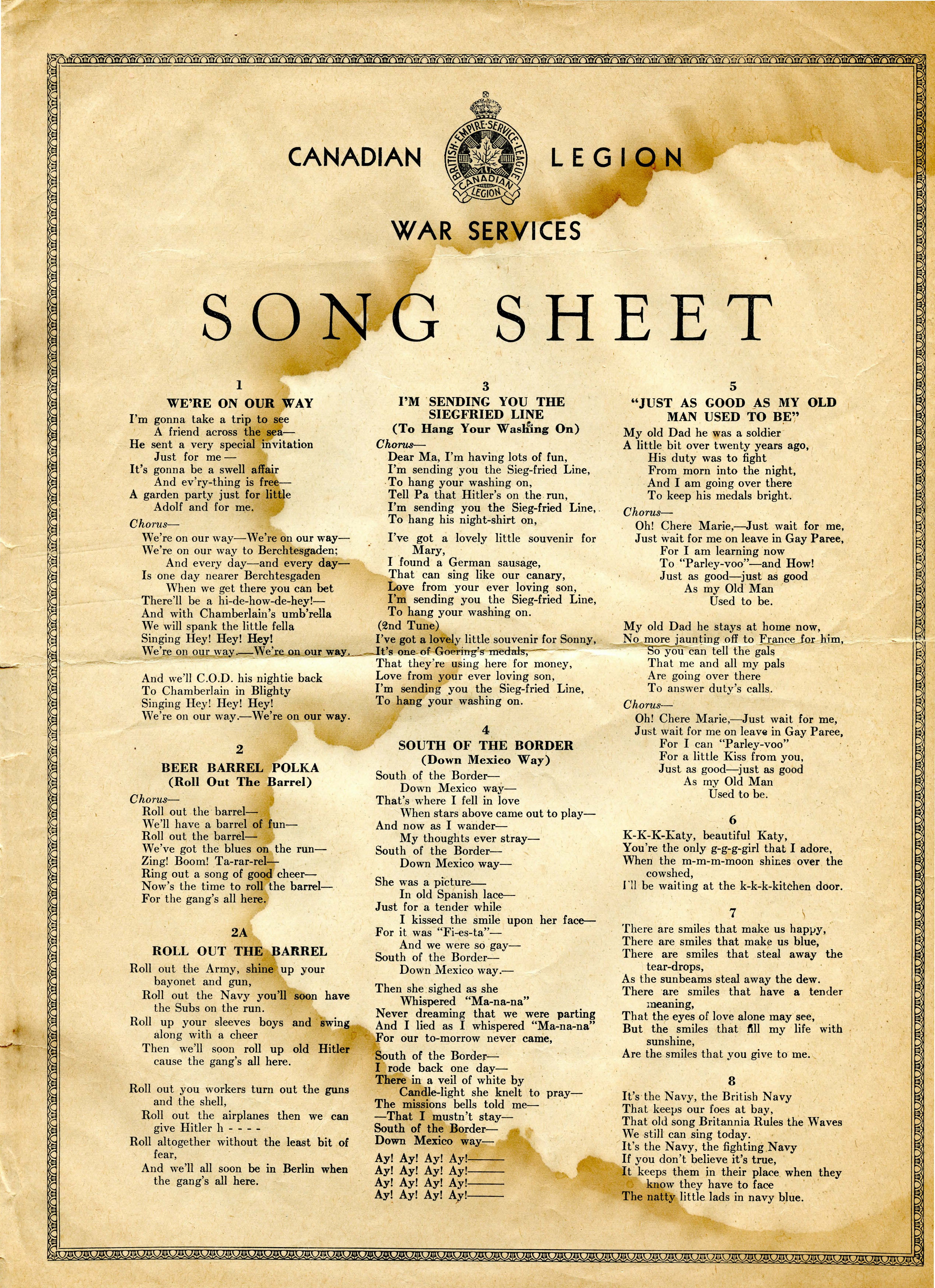 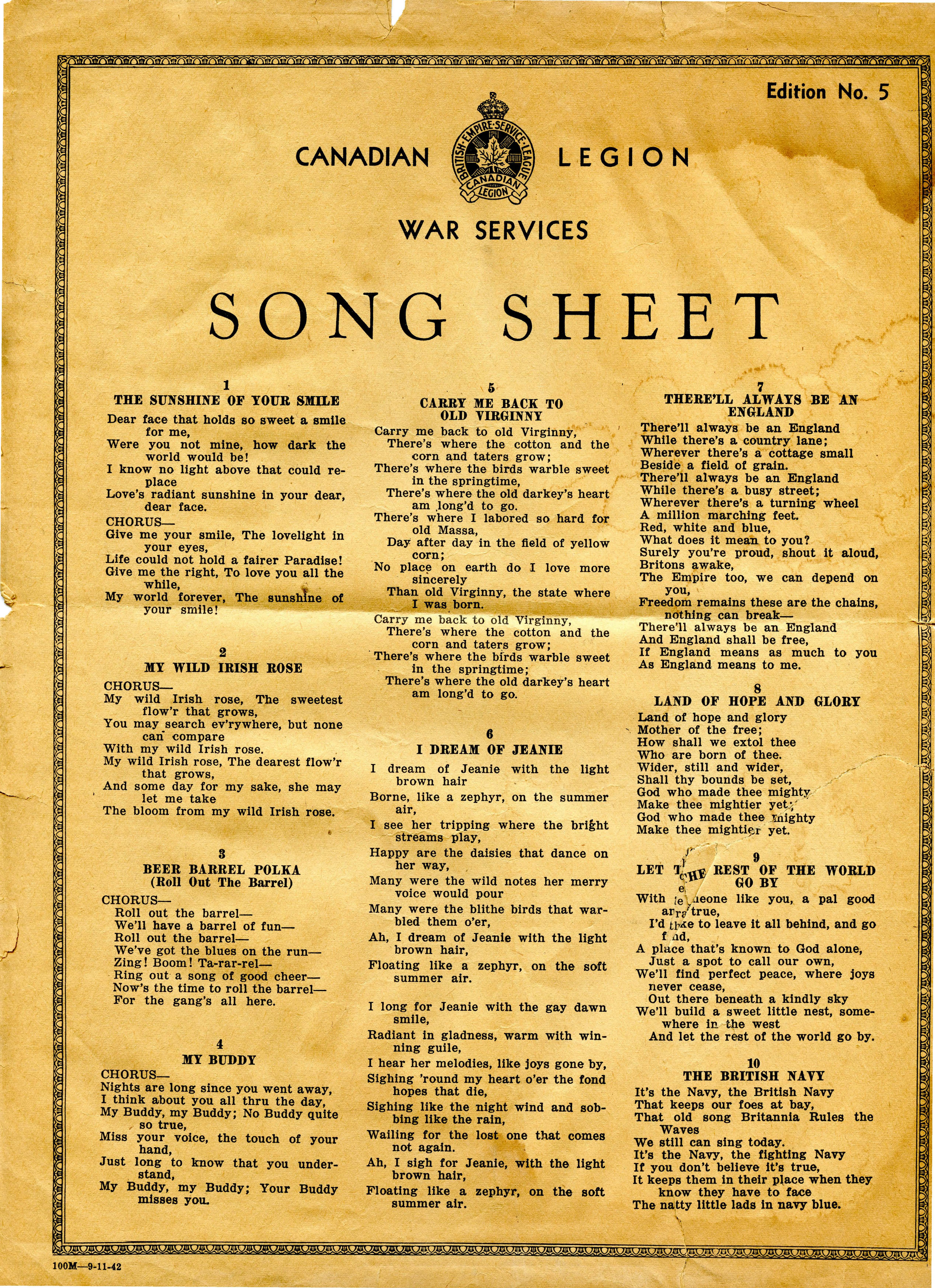 When Jim emigrated to Canada in December of 1921, he worked as a steward onboard the HMS Pretorian.  Several entertainers from among staff and passengers put on a concert in aid of Seaman's Charities. The program and names and signatures of the other entertainers can be found here.

Billy Eckstein was a Montreal-born entertainer, a child prodigy, who for many years performed at the Strand theatre, interpreting the silent movies from 1912 to 1932.  Jim arrived in 1921 and no doubt was entertained by "The World's Greatest Motion Picture Interpreter."  Later, Billy spent another 20 years performing at the Chateau Ste. Rose.  Jim's daughter, Joyce, remembered that Jim would go to the Chateau Ste. Rose to visit with Billy.  She suggested that they knew each other from the silent movie days and that perhaps Jim had occasionally filled  in to perform in the movie theatre. Is there any truth to that?

Another of the few pieces of music which survives from Jim's collection is a book of the "Full Words Music and Patter" of Harry Gordon's Song Hits.  This booklet was a supplement, containing 12 songs, presented with The Sunday Post on September 1, 1935.

The Railway Fireman and The Limb of the Law and Hilly's Man can be heard on Spotify in the Albums The Laird of Inversnecky Volumes 1-3. 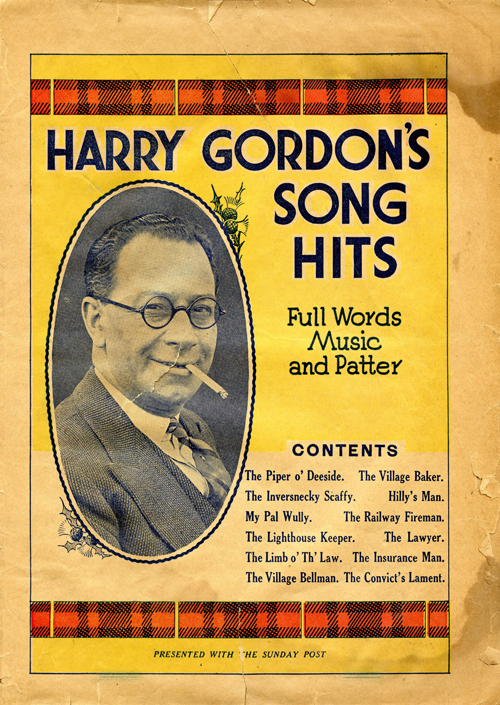 This book of sheet music from the film Brigadoon was copyright 1944 and 1952.  The film of the same name came out in 1954 and made the music popular. 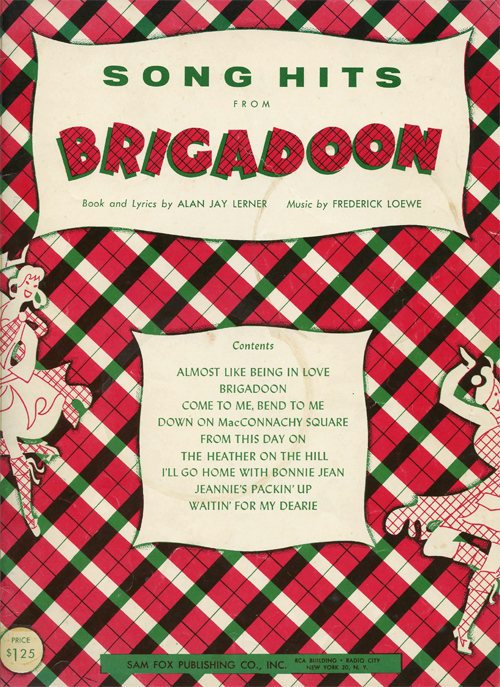 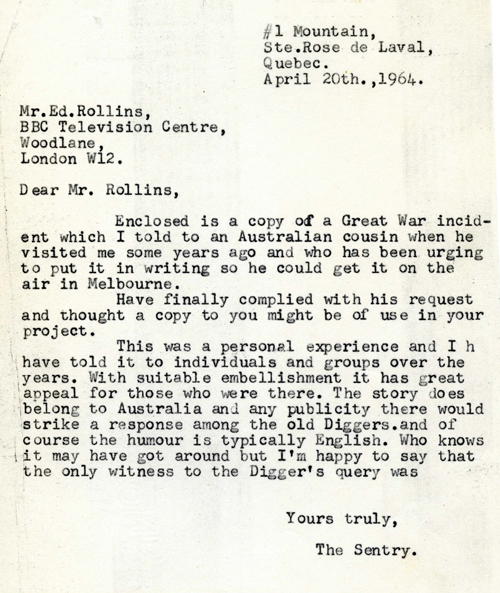 Once living in Montreal, Jim offered for publication various versions of a comical personal experience he had had while on sentry duty at Menin Gate during World War I.

This letter to the BBC testifies to the fact that Jim was the sentry mentioned in the stories and that he had told the story many times over the years to individuals and groups.

The following stories are three versions of Jim Waddell's humorous experience while doing Sentry duty during World War I, October 1917, near the Menin Gate in Ypres.

To the Editor of the Saturday Evening Post, dated January 22nd, 1949

Shortly after dawn on a chilly October morning in ’17, the attention of a British sentry stationed near the deserted Grande Place in Ypres was attracted by the approach of two objects emerging slowly from the direction of the Menin Gate.
On closer view they could be recognized as an Australian, helmetless, sporting knee-high rubber boots, hands in breeches pockets and leading by the reins linked over his arm, a listless and bedraggled mule.
One of the many teams employed to carry ammunition to the forward gun-pits, these sorely tried specimens of animal matter were liberally plastered with the clinging Flanders mud now drying into dirt brown and yellow cakes.
Obviously exhausted after a groping night journey through the mud soaked tracks and water logged shell holes of the battle area, they presented a sorry picture as they shuffled along towards some haven which promised rest and food.
Keenly aware of the bizarre figures they revealed to the morning light, the Aussie came to a halt at the sentry’s post (the mule complying without an order) and turning to the Tommy he enquired – “Have you seen the hounds go by?”
Original – Never been published to my knowledge. I was the sentry. W.

As dawn broke on a crisp October morning in 1917 I was alone on sentry duty not far from the famous Menin Gate at Ypres, Belgium. I spotted an Australian gunner, leading a mule, emerge from the gate and trudging towards my post.

They made a temporary diversion to the sporadic shelling. As they came closer, the bedraggled team, whose job was to deliver shells to one of the batteries, had evidently struggled through water-filled shell holes on the journey back.

Both were bespattered from head to foot with that notorious Flanders mud now frozen into cakes of brown and yellow hues.

Head down, hands in breeches pockets, the mule’s nose inches from the ground they appeared ready to drop from exhaustion.

When about to extend a friendly greeting my attention was held as the Aussie stopped and extracted pipe and matches from his pockets. Before moving on and disappearing round the bend he lit the pipe and turning to me enquired – “’Ave you seen the ‘ounds go by”?

Most of you have heard of the great battles of Ypres in the first war. Some of you may have heard of the Menin Gate. This entrance to the historic battlefields beyond the town is now a Memorial Archway containing the names of over 80,000 of the missing men of the Commonwealth troops who had fought in that infamous salient.

Out of this grim saga of carnage and bravery during the 1915-1918 period comes a very human story perhaps depicting the kind of spirit that eventually brought victory to the Allies.

On a crisp October morning in 1917, a British sentry was on duty at a cross-roads some 500 yards west of the Menin Gate. Around 7.30 am in the grey light of dawn he spied a man and horse emerge from the gate heading in his direction. On closer scrutiny he identified them as an Australian (slouch hat) walking ahead of a mule. The pace was very slow and as they trudged nearer he recognized an artillery man whose job was to deliver 18 pounder shells by pack mule to one of the gun pits and was returning from the previous night’s delivery. He now observed that both were covered from head to foot in that unmatched Ypres mud now frozen into cakes of yellow brown and reddish hues.

As the apparition came closer, (speed 1 mph) the sentry surmised that the unhappy pair must have set out in the dark of early morning and had the misfortune to slip into some of the numerous shell holes that lined the duckboard paths in the shell-poked area.

Obviously they were exhausted, hungry and miserable. The Aussie wore a pair of gum boots. The mule’s reins were over his right arm while both hands were thrust into his breeches pockets. His stooped shoulders were matched by the mule plodding along with his nose about a foot from the ground.

It was customary for the sentry to greet passers by with a “Hi, chum, how’s things up above?” However, the obvious misery and dilapidation of his first contact that morning held him tongue-tied. Before he could prepare a suitable greeting the Aussie had stopped opposite his post (the mule needed no command) and straightening up, extracted a clay pipe from his side pocket and a match from his right hand breeches pocket. Slowly and deliberately he lit the pipe and before resuming his journey he turned to the sentry and enquired…”Have you seen the hounds go by?”