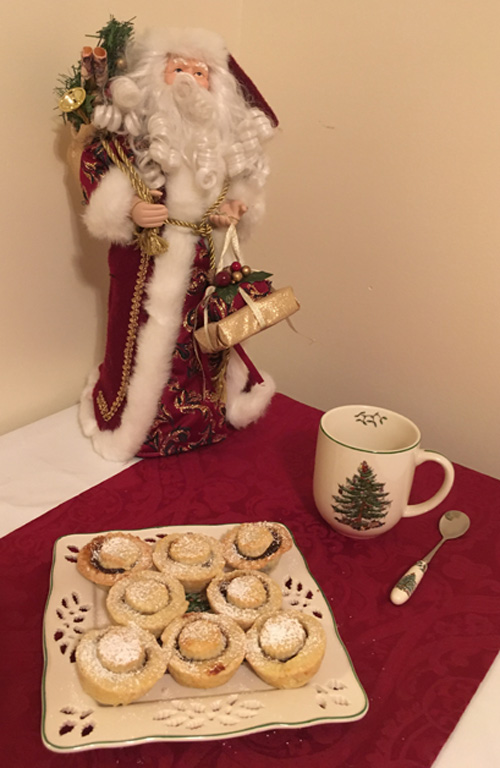 The following recipe for her mother's mincemeat was in Nell Shill's (1899-1991) collection.  Nell's mother, Ellen Mary Shill (nee Bartholomew) was born in the UK in 1857 and died in Montreal in 1929.  The actual origins of the recipe may or may not go back to Victorian times when the family lived in England.

The recipe contains suet but not beef.  Every other recipe I have found in my historic cookbooks includes beef as well. (Sounds unappetizing!) 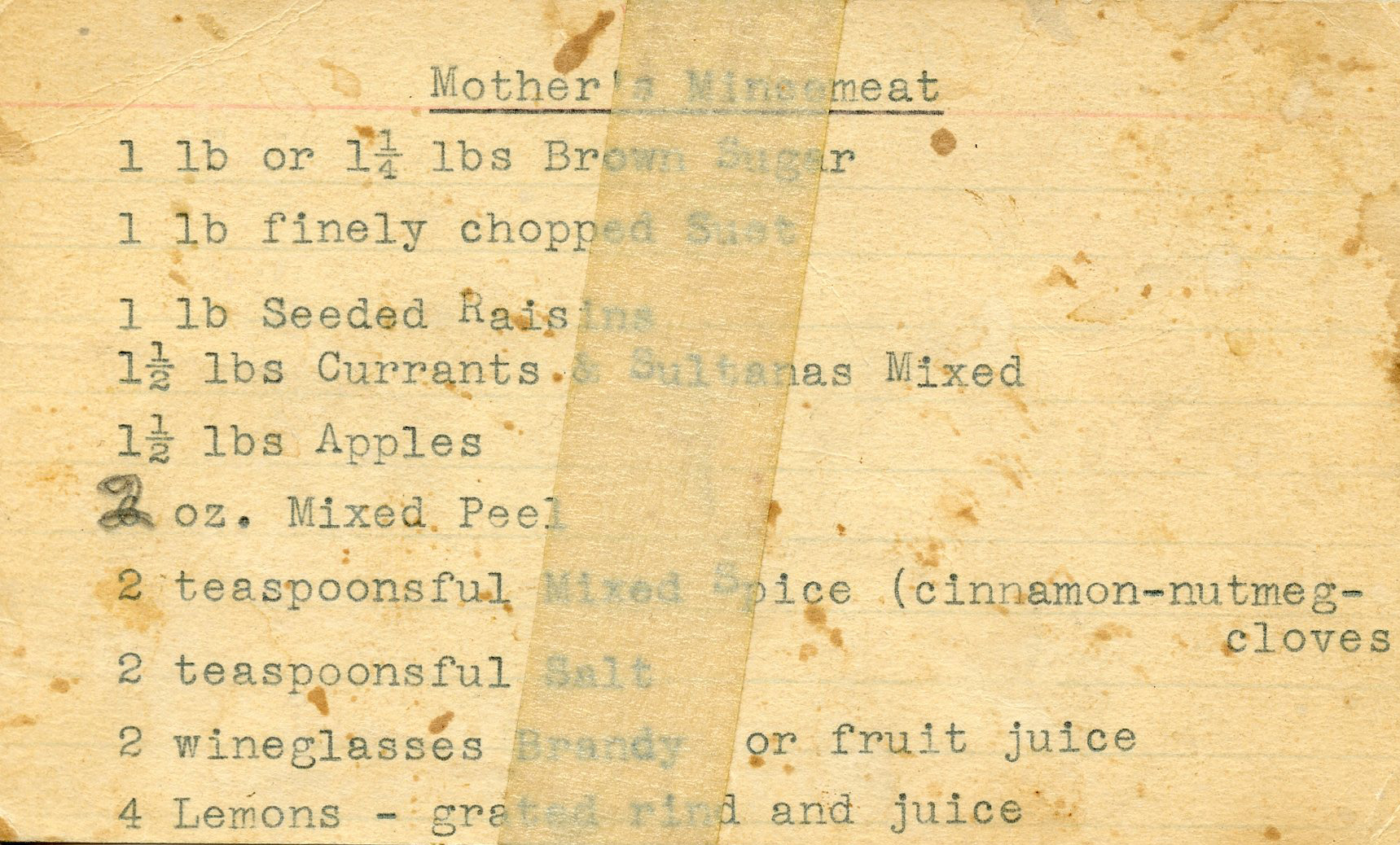 This recipe card with the ingredients for her mother's mincemeat was probably typed up by Nell as she did frequently. The reverse side of the card is blank. 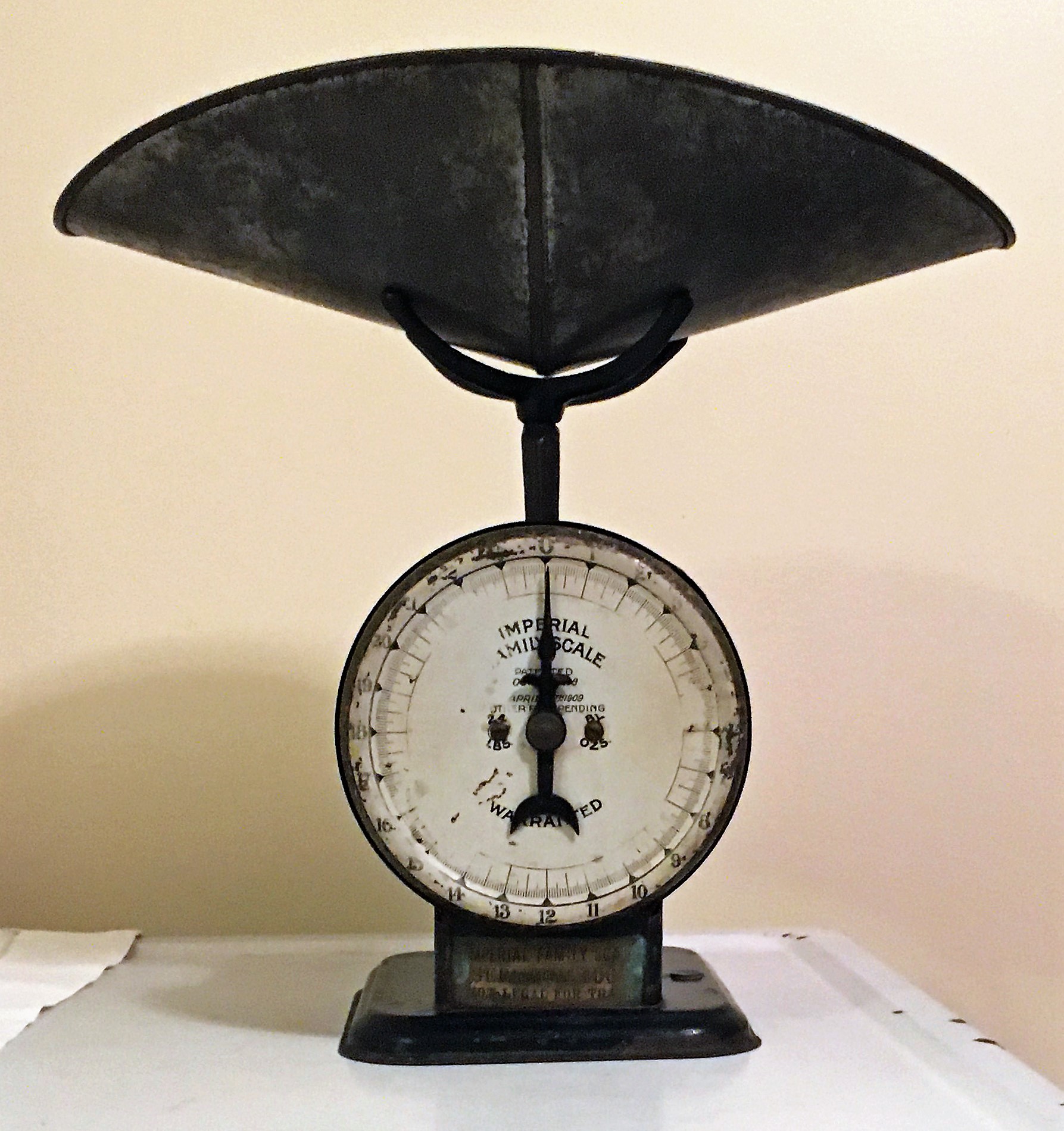 This scale came to me from the Shill family - Annie M.E. Shill's estate.

As is typical of British recipes, the ingredients are measured by weight in Imperial units - pounds and ounces. Amazingly, after more than 100 years, when the tray is in place, the hand sits at 0.

How big is a "wineglass"?

The recipe asks for 2 wineglasses of Brandy. An article reporting research on wine glass sizes over the years tells us the average size of a wineglass in 1900 is about 160ml or 5 1/2 oz.   Perhaps the amount of brandy can vary according to your taste.

Where are the instructions?

I have noticed frequently in older recipes that there are no specific instructions.  You must have to learn how to do it from someone and apparently, remember.  I'm partial to detailed instructions! (Whether I follow them to the letter or not!)

Why would anyone need 32lbs of mincemeat you might ask?  I certainly wondered.

My father, Keith Waddell, told me that usually, in the early fall, the church women would get together and cook large quantities of mincemeat to be sold at the Christmas bazaar, a church fundraiser.

Other items that would have been prepared ahead for the bazaar are Plum Pudding and Christmas Fruit Cake.

This recipe was originally used by Ellen Mary Shill (nee Bartholomew). No instructions accompanied this recipe! Instructions here are a patchwork taken from other recipes which either included beef or were for Green Tomato Mincemeat.

What to do with Mincemeat?

Mincemeat, especially of the traditional kind, is very rich and heavy. A little goes a long way - the only thing I make with it is tarts.  Yummy pastry and a little dab of richness! For this year's batch of tarts, since I didn't make 32 lbs of "Mother's Mincemeat", I picked up a jar at my local grocery store which had Robertson's without suet, which it turns out is perfect for me (I'm vegan).

Not being much of a pastry cook, I usually buy Tenderflake Tart Shells.  This year, only Mini-Tart shells were available, so I decided to try making my own.

For the pastry, I used Nell's recipe for "Very Good Pasty", removing the egg which, according to my mother, helps make it flakier.  Mom also suggested that putting the prepared pastry into the fridge helps keep the baking power from activating. 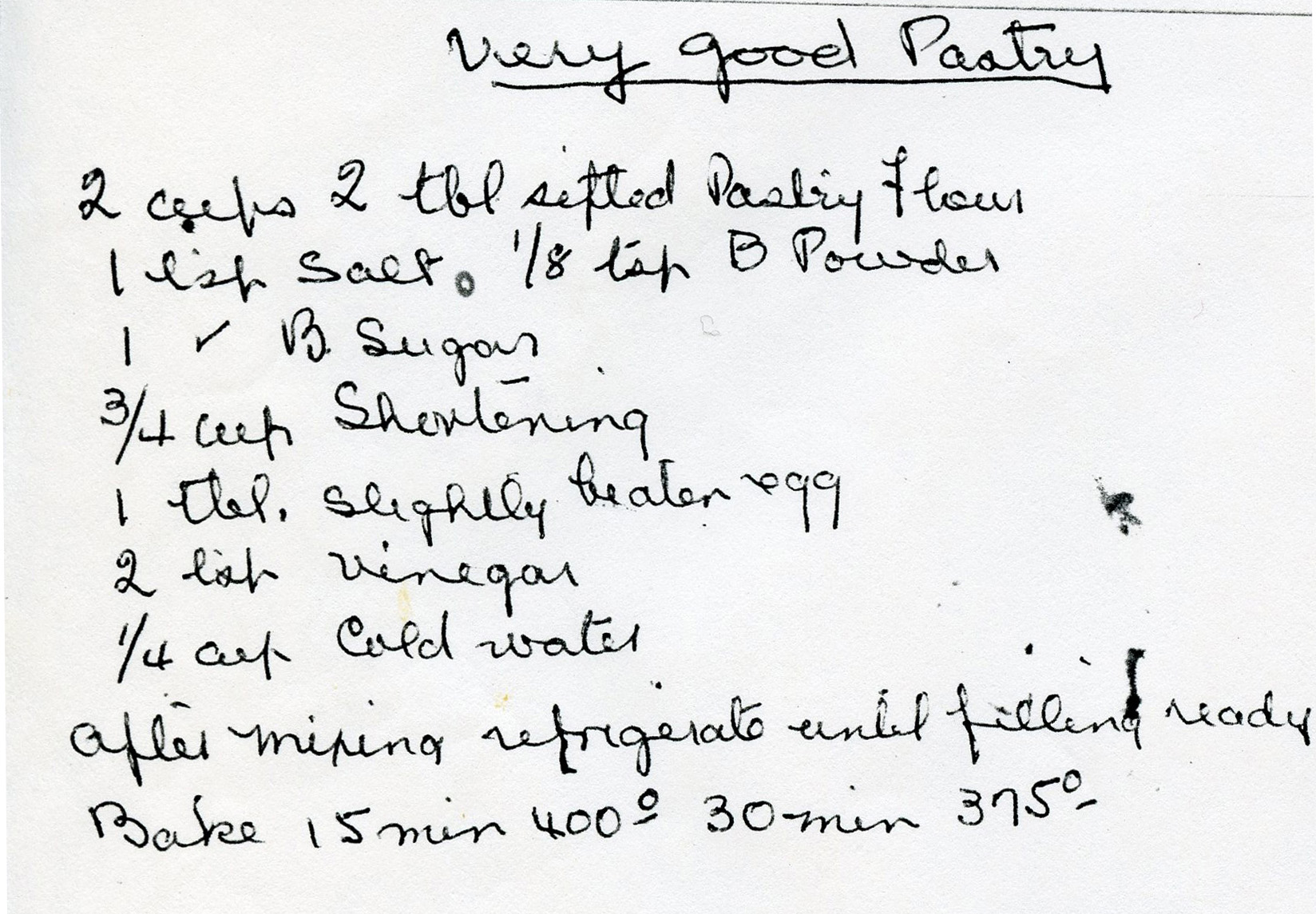 Despite my substitutions, this recipe was easy to handle and had good texture and flavour.

Again, no instructions accompanied this recipe, but you can follow almost any other pastry recipe.

2. Cut shortening into the dry ingredients using a pastry blender or two knives until the mixture is like coarse crumbs.

3. Add mixture of cold water, vinegar and egg a little at a time and blend with a fork until it sticks together.

5. Shape into a flattened ball and roll out as desired. 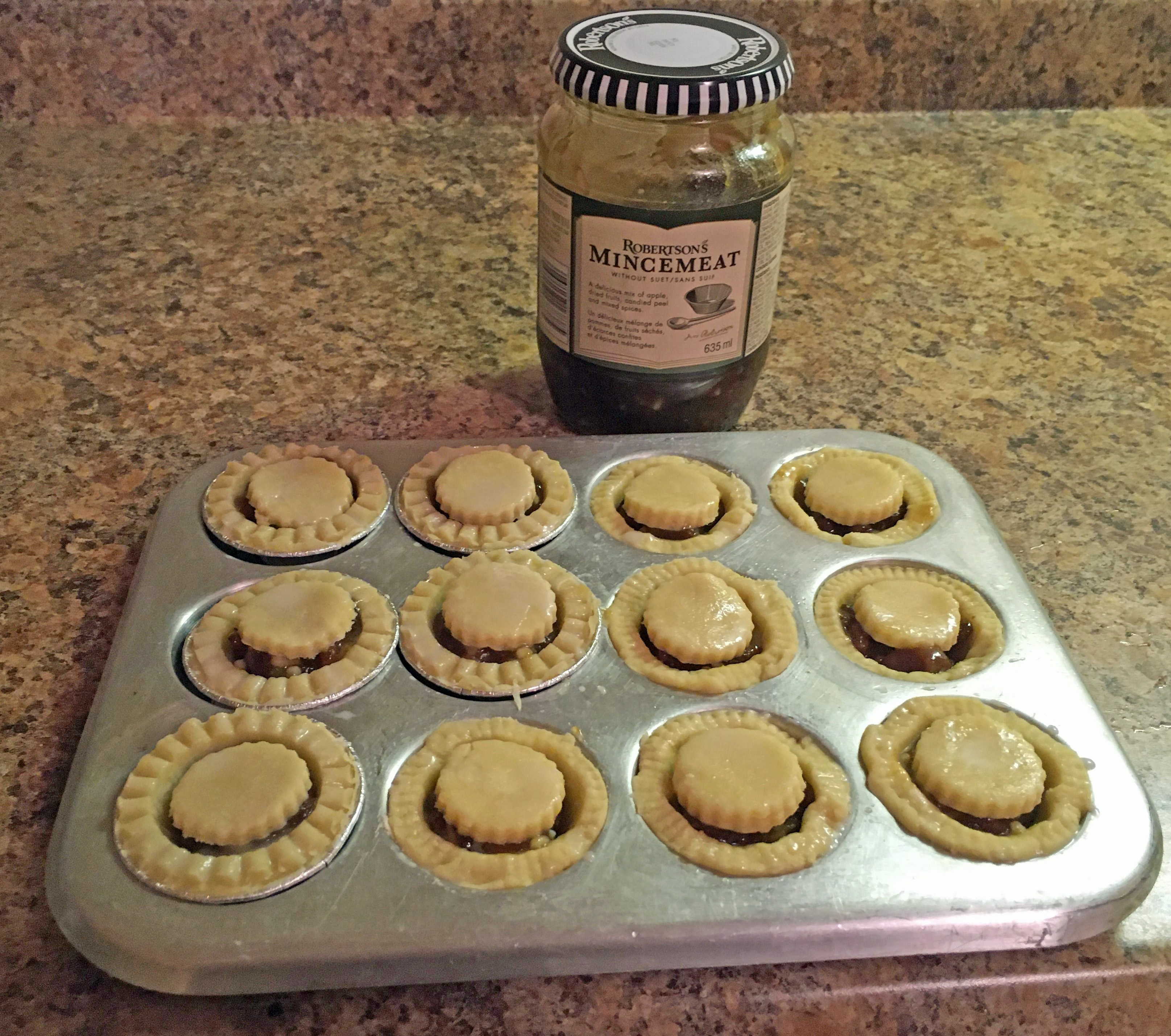 Mincemeat tarts ready for the oven.

Being short of the required ingredients, I halved the recipe and instead of regular shortening I put in Crisco Golden Shortening.

The result was 7 tarts with "Very Good Pastry" shells and 5 with Tenderflake Mini-Tart Shells.  The ones on the right are homemade.

”Cooking for Christmas” by Rosemary Wadey, published by HPBooks, Inc in 1985 has detailed instructions for cooking Mince Tarts. 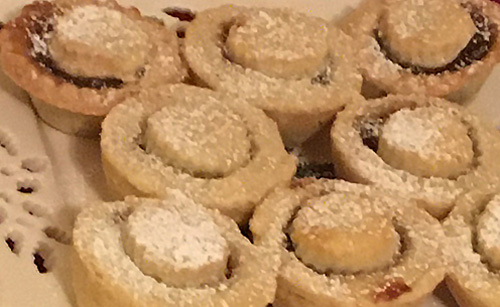