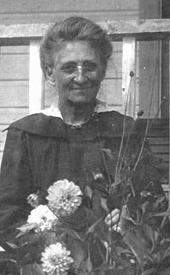 Ellen Mary Bartholomew was the youngest daughter of James and Jane Bartholomew of Portsea, Hampshire. Born in Portsea, at the age of 4 she can be found with her siblings, Jane S., William H. and Caroline, on the 1861 census in West Ham, Essex where her father was working as a government inspector of shipping.

In 1871, she was a 14 year old, the last child living with her parents in the village of Stubbington, Hampshire, while working as an agricultural labourer.

John Shill from London and Ellen Mary of Portsea met and must have fallen in love.  Ellen Mary’s father, James Bartholomew disapproved of the union.

James Bartholomew thereafter cut Ellen Mary out of his will.

Mother of 9 children, 2 of whom died as babies, Ellen Mary was personally well-acquainted with childbirth and children.  Daughter Nell talks of her being a Maternity Nurse but it is unclear whether she specialized in the care of newborn babies or was actually more like a midwife. Eldest daughter Caroline (Cara) followed in her mother’s footsteps to become a Maternity Nurse and stayed in England.

The Shill family lived in London during 1881 and 1891 censuses.  With young children at home, Ellen Mary didn’t declare a paying occupation.

In the 1901 census for Woodbridge, Suffolk, Ellen Mary was working as a dressmaker.  John Shill was working at the local lunatic asylum and lived in as did the two eldest daughters Caroline and Marion.  With younger children still at home, Ellen Mary did whatever was necessary to earn income and gather food as her daughter Annie described.  She sometimes cared for other people’s children to bring in money.

Alice Bartholomew, the crippled daughter of Ellen Mary’s brother William Henry Bartholomew died while living with the Shill family in their home in Bredfield in 1905.

When her husband left for Montreal, Canada, Ellen Mary may have felt relief to see him gone but the reality of trying to manage on her own may have been greater than expected.  Besides, he promised to stop drinking if they came over to Canada.  Elder son Jack, sent on ahead, ensured that John Shill had kept his word.

Upon confirmation of John Shill’s sobriety, the family planned their voyage across the Atlantic Ocean to Montreal.  The Salvation Army paid the trip in steerage on the passenger boat, the S.S. Kensington, in April 1908.  The family had to pay back the cost of the trip for 6 people.  Imagine the blow to have travelled so far and taken on such a debt only to arrive to a “tipsy” husband who had broken his word.  Hopping back on a boat and going home was out of the question.

For better or worse, Ellen Mary’s and her children’s futures were to be found in Montreal, Canada.

Physically small, Ellen Mary had a strong character.  She took care of her children and coped with an alcoholic husband.  Like many people of her era, she endured the losses of loved ones at young ages and the deaths of two of her own babies.  Her parents may have helped little if at all.

She was certainly tough from a child’s perspective as this story from her youngest child, Nell, implies:


The worst thing I ever did when I was a kid was run away from home I think. Not far. Just across the street and behind the telegraph pole til it got dark and then I came home. My mother was mad at me and she wouldn't even come to look for me. I felt terrible. Nobody cared. I was stuck outside in the road. Nobody was looking for me. They didn't give a darn whether I was coming home or not. They said they knew I would be back as soon as it got dark. I must have been about 10 I guess. Just at the age where you think people are gonna go crazy if you're not home for dinner.- Nell Shill

Also, she had no qualms about using physical punishment:

My mother, I can remember her slapping me. She used to slap your face. One time I said to her, 'You can't hit me, I'm bigger than you.' I was, you know, she was only about up to here.

Daughter Marion (May) Helps Out

Ellen Mary counted on her eldest daughter in Montreal, Marion (May), to help in times of trouble.  When she had work, it was May who would come take care of the younger children.

When Ellen Mary injured her sciatic nerve,  she stayed with May.  Nell tells the story:

"I won a dog on number 13…He was an Airdale and he'd listen to nobody but me and then what happened, he used to jump up on Mother when she was carrying the laundry from one place to the other, you know, she'd carry it, she put out her leg to knock him away and she got sciatic nerve. She pulled her sciatic nerve and she had to go and stay at May's. So I had to come home at noon and at night to look after my dog. And one time I came in, I think I told you, and he was so glad to see me he was going like this and what he had done, was he had ripped a feather pillow out and there was feathers flying all over the place and I had to clean everything up."-Nell Shill

Before Mother came home, Nell had to get rid of the dog.

In May 1916 when Ellen Mary and John Shill received word of their eldest son Jack’s death in the war, daughter May  came to stay with a distraught Ellen Mary for about 3 weeks.  Sixteen months later, in September 1917, the ordeal was repeated with word of Bert’s death in an accident. 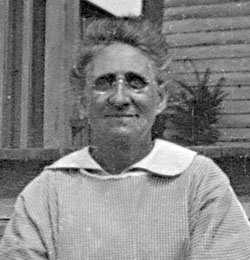 Ellen Mary could have been a bitter and angry woman but in her photos she appears a kind and gentle person.  She would laugh and talk with the girls’ boyfriends despite the jealousy of her husband.

When John Shill would lock the girls out of the house for staying out after curfew, Ellen Mary would get up after he went to sleep and let them in.

Between November 1918 and June 1920, Ellen Mary and the girls moved out of the home with Father to a flat on Selby St. which they had to pay to furnish.  The war over, the three younger girls, Annie, Grace and Nell, were in their twenties and working. Both sons had died.  Once again, Ellen Mary started over.  Yet, living with her three daughters may have lightened Mother’s burdens somewhat—it laid the foundation for a livelier social life .  Certainly, young men would have been attracted to a busy home with 3 single women!

We had fun. We had a lot of young fellows come in and help us, the three young women. Mother would never leave us alone with them. Those were the days...Mother used to sit in the corner and crochet all the time we entertained.-Nell Shill

Holidays in the Countryside

When youngest daughter Nell went on holidays to the countryside, she and her best friend, Marie Glazin, always took their mothers along.  In this way, Ellen Mary had the chance to leave the city at least a week or two a year.

Nell talks about staying with her mother when she came home sick after her honeymoon.  With the birth of Nell’s first two children, she naturally turned to her mother for help and advice. 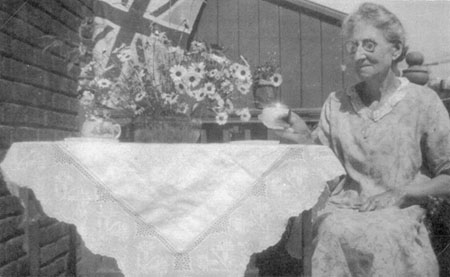 Mother gave me my christening breakfast for my first son. She took stoppage of the bowel and she died within the week. (08 May, 1929)

She had been over to England and back, for the first time since she'd come over. She had everything finished. She had made her trip to England. She'd seen everybody there. She'd seen that I had a son. And she'd given the breakfast, so it didn't matter. She didn't care.

What happened was, she'd had this operation of the stoppage of the bowel. They were supposed to put a pillow beside you so you couldn't turn over, ‘cause if you turned over you might break open the incision. So, we employed a private nurse, and she left and went and had tea. Mother turned over and broke open the incision and everything fell out.

Anyway, she was 74. It was very young for her. She was a very active person.- Nell Shill

August 1876:
Sarah Jane, eldest sister died, age 31.
April 1879:
Hannah Ellenor, Ellen Mary and John Shill’s first child died at the age of 2 days.
September 1881:
Jane Bartholomew née Willis, Ellen Mary’s mother, died, age 59.
November 1887:
Violet Elizabeth, Ellen Mary and John Shill’s 4th child died at the age of 16 months.
October 1892:
Harriet Matilda Bartholomew, née Burden died, age 39. "My mother was devoted to yours and as she was expecting my sister Annie (b. Nov. 1892) when your Mother died she wasn't told for some time after." -Cara Shill to Alfred Bartholomew
January 1894:
William Henry Bartholomew, brother, age 41. "Annie was only a few months old when your Father died and she came to Portsmouth hoping to be in time to see him." -Cara Shill to Alfred Bartholomew
January 1896:
James Bartholomew, Ellen Mary’s father died, age 76. He didn't even mention her in his will.