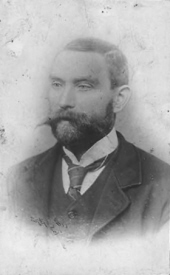 Nell had virtually nothing good to say about her father as can be seen by the following comments. She said nothing about what happened to him after the girls left him and doesn't talk about his death in 1924.

John Shill's death certificate claims his address was 630 St. Antoine, the same as his wife, but his death took place at the Protestant Hospital for the Insane, Verdun. The primary cause of death is given as "chronic nephritis" (inflammation of the kidneys?) and the immediate causes: uraemia ("a toxic condition resulting from the presence of urinary constituents in the blood" - The Free Dictionary) and gangrene".

The grandchildren of John Shill have heard tell that he had an illegitimate child that he brought home for his wife to take care of. It would seem likely that this child is the Sidney Shill, (nephew), who shows up with the family on the 1901 Census in Bredfield, Woodbridge, East Suffolk. To this time, there is no documented proof that Sidney Shill is that child.  There is some evidence that  Jack Shill Voss is the illegitimate child and may be the same person as Sidney.  Jack Shill Voss was the son of Mary Ann Voss who was a fellow worker at the Melton Lunatic Asylum which has since been converted to housing.

The following comments in red are taken from the "Oral History of Ellen (Nell) M.A. Shill Waddell".

He was a tailor to start with and he finished up being a male nurse. You know, he went around to houses and helped people being a male nurse.  The last thing he did, he and my sister was a nurse at that time, and they took a house down at Ipswich, Felixstowe, which is a seaside place and they had patients at home, before we came over here.

My father came over about 2 years before we did (1906). Father got a job here as soon as he came at the CPR. But then he didn't stay with them. He then got a job at a wire factory. He used to gauge wires. He was very good at that, gauging wires. Then he sent for my eldest brother, Jack, and he came over and got work in the CPR.-Nell Shill

John Shill had other jobs which are not mentioned by Nell in her story. The following table shows the occupation and address of John Shill taken from various documents from his childhood through the 1911 Canada Census.

Before he had come over, Father had given up drinking, so he said. Then he promised he was not going to drink, otherwise my mother wouldn't have come.

He met us at the boat, a little bit tipsy. Maybe seeing the family was a little bit more than he could take, I guess. We had to go into rooms for a while until we got a flat, and gathered up a little bit of furniture and we were off and running.

How he ever kept his job I wonder, because he drank every weekend. He always sat in the corner, and had a case of beer and drank all weekend. He never bothered me because I used to be the youngest and if he wanted anything he'd send me for his beer. He maybe gave me a quarter a week or something to run for his beer. I had to do as I was told. -Nell Shill

When Father blew up he'd...thing was he always imagined that things were going on that weren't going on. If he saw anybody leaning over you he'd think, that something was wrong. He always thought there was sex involved. So, he'd say, "Get out of here. I don't want you in my house."

Poor Mother, she had a terrible time. He used to look through the key hole and watch that nobody went near Mother. He'd go into his bedroom , shut the door, and Mother was always laughing and talking with our boyfriends and that. He would watch and see that she wasn't doing anything she shouldn't be doing. That's pretty hard to take.-Nell Shill

The family left Father. I was working and Grace was working. Dad wouldn't let us come in at night after a certain hour. He'd lock the door. He'd say, "If you've stayed out that late, you can stay out the rest of the night." My mother would have to lie awake and wait until she heard him snoring, and then she'd come down and open the door for us to come in.

Anne used to go to bed with an umbrella beside her in case he came in and attacked her. She was scared of him. I wasn't scared of him, that's why he treated me differently. He'd say, "I'll slap you, I'll do this and that." I'd say, "Go ahead. Slap me. Give me a slap if you want." Of course, he'd laugh and go away. I was cheeky, then. (laughing) I guess that's where I got my cheekiness from, just having to put up with him.