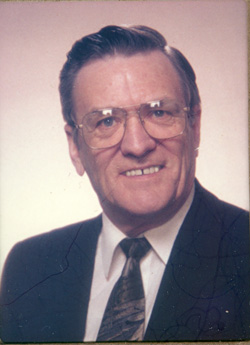 Keith Waddell, a resident of Glen Robertson for the past twenty years passed away at the Chartwell Residence in Lancaster, Ontario, at the age of 83 from complications related to Parkinson's disease.

John Keith Waddell was born in Montreal, third child of Ellen M.A. Shill and James Verner Waddell.  He graduated with a B.Sc. in Forestry (class of 1954) from the University of New Brunswick in Fredericton.    While there he met Helen (nee Tompkins), his wife, with whom he celebrated 61 years of marriage.

At the beginning of his career in forestry, summers were spent timber cruising in the forests and mountains of British Columbia which he loved.  Shortly after marriage, he and Helen moved to Prince Rupert where he worked in forest management with the British Columbia Forest Service and where their son, Peter, was born.  They spent a year in the rain before moving to the Lakehead, near Thunder Bay for work with Great Lakes Paper Co.  After the birth of their daughter, Debbie, Keith was hired by Consolidated Bathurst in Pulp and Paper sales, requiring a move back to Montreal in 1961.  He stayed with the company until he retired in 1985 and started his own business, Webpath Inc.

Through the years he volunteered variously in municipal politics, leading a group on Sleep-Wake disorders, working as a ski-patroller at Morin Heights, and working on a local Environment Committee among other activities.  A physically active person, he enjoyed skiing both downhill and cross-country and played squash into his 70s.

Besides his beloved wife, Helen, he leaves his daughter Debbie (John), and grandchildren Elena and Coleman as well as his sister, Joyce Waddell Townsend.  His son, Peter, predeceased him as did his brother Graham.

He will be missed.