With contributions from Lyn Horsburgh. (in quotations)

"Clifford and Ken's mother died giving birth to twins in 1918, one twin died at birth and the other was adopted."

"Their father went to pieces and is said to have taken to drink and was unable to care for the children.  It is not clear what happened to Irene and Audrey at the time.  Clifford and Kenneth were placed in an orphanage, from whence they came to Canada."

Below are the Juvenile Inspection Reports for Clifford and Kenneth who were both brought over to Canada by the British Immigration and Colonization Association of Montreal (BICA). 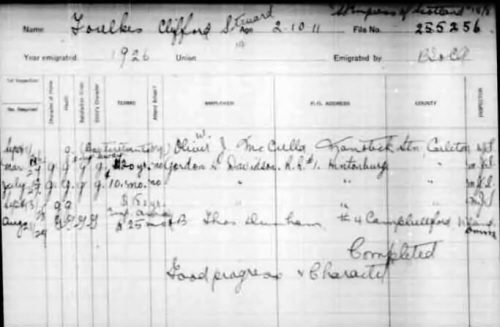 Clifford, about 4 years older, came over ahead of Kenneth, travelling on the Empress of Scotland with 13 other teen aged boys, departing Southampton, England August 7, 1926, arriving Quebec, August 14.  For the Canadian passenger list he gave the name of his sister Elsie Foulkes of Abergavenny as his nearest relative in the UK.

His first placement was with Oliver W. J. McCulla of Manotick, Ontario, near Ottawa where it appears he received bad treatment and ran away.  In March 1927, he was with Gordon H. Davidson of Hintonburg, also near Ottawa.  Here he stayed from 1927 through 1928.  By August 1929 he is working for Thomas Dunham of Campbellford, Ontario where his brother Kenneth was placed on his arrival and stayed throughout his time under BICA's protection.  Did Clifford start with Thomas Dunham and ask for Kenneth to be placed there as well? 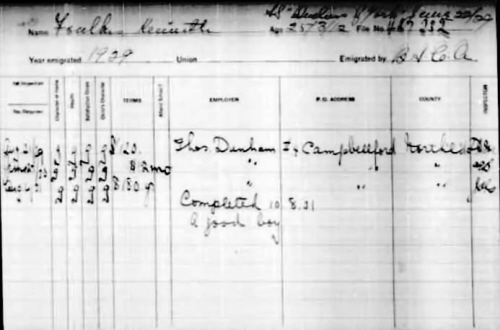 Kenneth Foulkes travelled on the Duchess of York in a group of 41 boys departing Liverpool June 14 1929 and arriving in Quebec June 21st. His date of birth on the card is 3 years off.  He was only 14 when he arrived.

Both Clifford and Kenneth Foulkes completed their time with BICA.  What they did in Canada after 1931 is unknown.  There is a family story which claims: "that they went to farm tomatoes but it failed and they returned home to Wales."  Perhaps after leaving Thomas Dunham's farm they tried their hand at farming on their own and that is when the tomato crop failed. 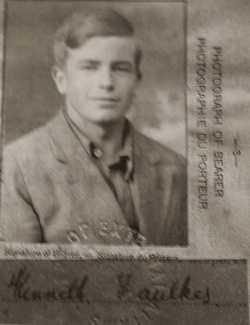 In 1933, mid-depression, they returned to England together on the S.S. Antonia arriving in Liverpool on April 30th.

"On their return to Wales, there was great unemployment.  At some point before World War 2 they joined the British Army as gunners in the same unit of the Royal Artillery. "

This photo of Kenneth Foulkes is from his Canadian passport which he used to travel home to Wales.  He was 18 years old. 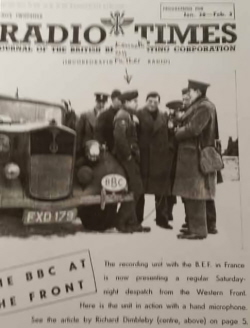 "When World War 2 broke out they were both sent to France together.  They were evacuated from Dunkirk in 1940, still together, and returned to the UK.  They spent some time in the UK as there is a Radio Times magazine with Kenneth on the front cover.  He was being interviewed at his gunnery post."

The Radio Times Magazine shows Kenneth Foulkes being interviewed. He is leaning against the vehicle with the arrow pointing to him.

Apart from the time that Clifford went to Canada ahead of Kenneth the two brothers had always been together, in the orphanage, in Canada and in the Army until Dunkirk.  But later, Clifford was posted to the theatre in Europe and Kenneth was posted to Singapore.

"Clifford survived the war and ended up with a cobblers' business and shoe shop in Surrey, England.  Somewhere he must have gotten training as a cobbler.  I remember going there as a little girl and being fascinated with the wooden 'feet' he made the shoes on! He had two children."

"Kenneth married and although he never saw her, had one daughter.  His wife was pregnant when he was posted to Singapore.  He did receive a letter with the news that he was going to be a father and wrote that he was 'very pleased'.  Very sadly, Ken was captured by the Japanese at the fall of Singapore and was sent to work on the Burma railway.  He managed to survive those terrible conditions, and when the railway was finished, the Japanese moved the remaining prisoners (thought to be about 1000 from an original 10,000 that worked on the railway) to a troop ship to be sent to Japan for slave labour.  The Japanese did not abide by the Geneva Convention and did not display a red cross to show the Allies they were moving prisoners.  The Allies recognized the ship as a troop ship and bombed it.  There were only two survivors and unfortunately Ken was lost."

Read more about the British Immigration and Colonization Association (BICA)

Read about some of BICA's Problems

Go to question about Anatole Mille