To Montreal, Canada via London, England

The following story was submitted by Harold Berglas of Montreal.

My Mother was born in London, England as Aide Moslow in 1916.  Her father died in England about 2 years later and her mother took the kids home to Poland.  In hindsight, that turned out to be an unfortunate move.

In 1939, Aida returned to England.  Now age 22, my mother spoke no English and just had a few notes her brother made for her: “I am UK SUBJECT.  I speak no English.  I was born here.  Please let me in.”  She had a small notebook with phrases to get into the UK.  A month later the Germans invaded Poland.

Her passport-documents were stamped with a swastika, since she travelled by land and sea to England passing countries between Poland and England. Although Jewish, they let her go because she had a BRITISH Passport. They did take the time to spit on her, she retold me.

The rest of the family, my mother’s mother, uncle and his wife and kids are all documented in the archives of Yad Vashem, as "people we never hear from again" by relatives' testimony. There are no death records kept for the millions who died at that time - Just testimonials of friends and relatives of former relationships.

My father's name was Leiner-Berglas.  His parents were not married in a church, so the authorities hyphenated his name. Later (and even before) he used the family name of BERGLAS as did all our other relatives. His father's name was Chaim BERGLAS. I had to apply to Citizenship-Canada to remove the dash and the "Middle name" from my certificate.

Father was born in Hungary, February 13, 1915.  He left in a series of moves to the UK. Nine months before the World War II started he left Belgium (he spent 6 months there) to go to England.

There is no doubt; we all appreciate what England did for us. They let him in as a refugee.

I have papers for his naturalization that he applied for and was granted, and even an OATH of allegiance he signed (to his majesty the king, George VI, I believe.)

My father's side, lost 2 direct family-relations in the holocaust, and the rest (An aunt, Helen, 3 uncles, Abraham, Bernard and Simon, and 1 grandmother, Bertha) left to the UK, and eventually to Canada.

In March 1942 my mother and father married and they had my sister, Helen Berglas, in March 1943. Helen is pictured below in front of the family's home in London in 1951. 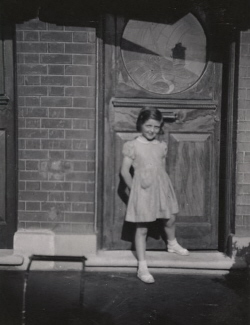 My mother would recount stories of her life in England. She learnt English quickly, and when they were married, my parents lived at 26 Heber Road, same address as my birth and same address as on the SS Scythia's Passenger list. My father said: he bought the place, a duplex, very common in Montreal and I assume London, and rented the upstairs out for about the price of the mortgage.

Mother said that during the war there was rationing, so to make extra cash, they had chickens. Chickens lay eggs and eggs were hard to come by.

My mother told me.... She worked making bombs in a factory, but my father was not allowed near the entrance or nearby (he was an alien, and not a citizen yet), because he might be a saboteur. SO, she had to meet a block away when it came time to pick her up after work.

I'm pretty sure neither learnt to drive ever, in their lifetimes, not even a motorcycle.  So, they probably took the TUBE or bus home, together.

By 1949 Adolf and Aida Berglas are found on the London Electoral Register in Willesden at 26 Heber Road.

My mother recounted that when King George VI died in February, 1952, before we left, she sent a card of condolence to the Queen. She told me that 'her office' replied to the message with a small note. I assume it was a "canned reply", but my mother appreciated it nevertheless.

My aunt Helen Berglas lived with us in England, my mother said. She was a "nurse"(unlicensed, since she was not fluent in English yet).  She left for Canada in December 1949 with her mother, Bertha and brother, Simon, following her youngest brother Abraham who arrived in 1948 and her oldest brother Bernard and his wife Ethel, who arrived in May of 1949. 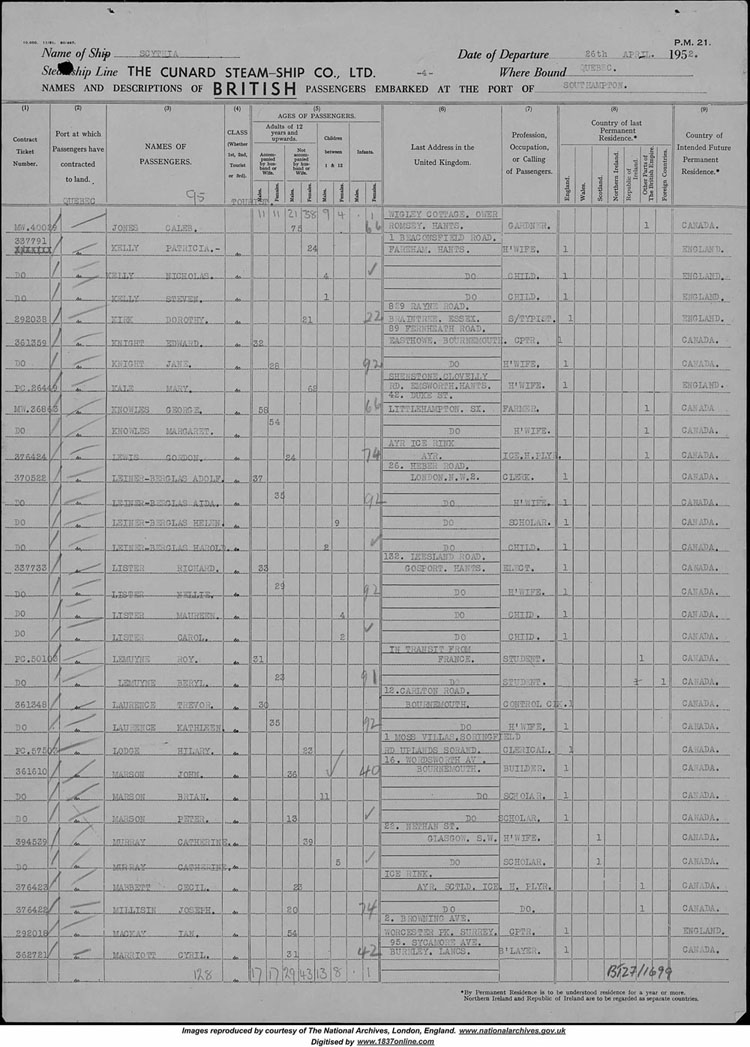 I really have no idea what was in my father's mind when he moved to Canada.  I know for sure, they had nothing left in Europe. What made Canada appealing is therefore - A MYSTERY.

The Berglas Family in Montreal

We moved to Montreal right away.  First we lived on a street near Park Avenue. (Near St Urbain and Bernard area.)  The Eaton's Santa Claus parade went by there, and my father carried me on his shoulders yearly, till I got older of course.

My mother lost her accent and style (lift, boot, queue were eventually replaced with elevator, trunk and lineup). My mother went through Celsius in Europe, then Fahrenheit in England, then back to Celsius (metric Canada).  Same applies for kilos and pounds.

My father was much quicker to adapt. He was a good "business man". In Canada, he flipped a movie theater in Uxbridge, Ontario. That was 1960s (early), before the word FLIP was invented and before people used the word "renovated". And when the union-hired projectionist got paid during renovations (to my father's frustration), he paid the wages as an expense of doing business. Seems he bought the place, redid the seats and stuff, I assume painted, repaired, etc. and then sold it for a profit a few months later on. Eventually he went on to become a land-speculator, and that's how we were fed, educated and lived.

He also sold pearls. My uncle was a big NY "distributor", and he started him out. Eventually he took a trip or 2 to Japan to buy "merchandise", what big companies call "product", and went travelling by train across Ontario and Quebec to small towns and places to sell his "stuff". Eventually he used commission salesmen, and had a book he kept of salesmen, prospects (clients and non-buying clients), lists of his inventory, and prices. Adolf Berglas would have been perfect candidate for a "handheld device".

When the Queen came to visit Canada in 1959, she came along Cote St Catherine. I stood on a small hill to see her. Then we moved to Darlington Ave. (That's near Van Horne and Wilderton). My grandmother was in walking distance as were my uncles. We had no car.

I never thought of myself as a British immigrant. We were/are Canadians, not new really, since I was here since I was 3 years old, my sister was just 6 years older than me.

I have met other British-Canadians, some who arrived more recently than us. I understand that Canada did have many immigrants (I think all of us are except for the native-Canadians), so it doesn't surprise me when I encounter a foreign national.

My school friends and street-friends had no background issues. We all came from different places, different financial means.

Of course our school had 1 or 2 rich people, like the CEO of a large shirt company or a Canadian diplomat, and attending a birthday party was a thrill: watching movies in the basement (on 16mm film of currently showing movies), with French waitresses in short dresses offering cigarettes in a whiskey glass, and small hotdog hors d'oeuvres .

The other party we had on Halloween (when the clock went back), had non-Frozen fruit out of season from Florida.  (In October- it's cold in Montreal).

I think my generation saw their parents survive the Europe of the 1940s, and pick themselves up, as a matter of common sense and growth. It wasn't Bold and Courageous at the time. It was a necessity; it was what you needed to do.

My parents and everyone else never spoke or told about what happened. It is a symptom of their grief, I suppose.

My sister got a B.Sc. in meteorology, and worked for CP Rail as a programmer before IBM-NY hired her. She became a computer whiz (wrote a portion of a compiler).  ME - I went on to become a BIGGER expert in IBM mainframes service & support. I was part of the team that wrote the qualifying tests. I retired after 30 years in computers and my systems get rebooted in decades, not overnight!

I still think laptops/desktops are toys, but I actually know them as well.

Today, my classmates are doctors (about 6 or so), a Doctor (Professor) at McGill, eye-doctors, internists, psychiatrist, etc. Another works in BC as a computer manager. They all went on to become essential citizens and contributors to the common mosaic. It's amazing how some people are so modest, that they don't see their accomplishments as "fantastic", like we do. I assume they know it's something, just not anything spectacular, you know what I mean?

Join in and write your own page! It's easy to do. How?
Simply click here to return to Your Stories about Immigrants from Britain