A Sketch of Fontley Iron Mill circa 1873

Fontley or Funtley? Fontley Iron Mill was also known as Funtley Iron Mill. I choose to refer always to it as Fontley. Fontley was a small village 2 miles north of Fareham, Hampshire, England. 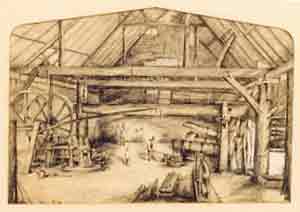 A sketch of Fontley Iron Mill, Hants, England, dated 1873, in the possession of a descendant of John and James Bartholomew.

Henry Cort and the Iron Mill

From the 1770s until 1789, Henry Cort owned the Fontley Iron Mill and forge. In 1781, Cort entered into a partnership with Samuel Jellicoe whose share was paid by his father, Adam Jellicoe. By 1782 and 1783, Cort had been awarded patents on a new process for producing wrought iron called “puddling”, which he used at Fontley.

In 1789 when Adam Jellicoe died, it became evident that he had used public funds to support development of Cort’s new process. In order to pay back the money that Cort owed the Crown, a court requisitioned the property at Fontley and another one at Gosport. Cort's partnership with Samuel Jellicoe was dissolved. Samuel Jellicoe subsequently was able to clear his debt and take over the properties. Henry Cort died a poor man in 1800.

Jellicoe owned Fontley Iron Mill until it was sold in 1815 to John Bartholomew, who had worked for Henry Cort as a “finer”.  From Singer's contribution to Titchfield, a History (1982).  For more details: see here.

John Bartholomew would have been about 60 years old in 1815. He was the grandfather of Ellen Mary Bartholomew’s father, James.

Cara Shill states that both James’ Father (James) and Grandfather (John) were from Founders at Fontley near Fareham.

“They ran the Iron Mills at Fontley, Fareham, the last of the privately owned iron mills”.

In fact, Pigot’s Directory for 1828 had an ad for John Bartholomew and Sons, wrought iron manufacturers at Funtley Iron Works. By 1847, there is no longer any mention of them or the Iron Works.


“The Jellicoe family owned the place some time previous to the Bartholomews and made money there but unfortunately when the Bartholomews had it the Government Dock Yard prevented private mills making money and Great-Grandfather (James) lost a lot of money and eventually died at Portsmouth with Grandfather (James).”
“I believe he (Grandfather) lived to be over eighty. He had several other children and I have met a descendant of one of his daughters.”

Following is the text of an old typewritten page in the possession of a descendant of the Bartholomew family. -Origin and date unknown.

“My father was a marine store dealer, and used to send his old scrap-iron by road to a village called Funtley, between Romsey Abbey and Southampton, where there was an ancient iron mill, owned by a very old gentleman named Bartholomew. My father took me down to see the process of working the iron. As far as I can remember, the pieces were carefully packed in square heaps about a foot high and eighteen inches long. They were next placed in a large oven and heated white hot; then drawn out in the way a baker draws his bread; and slid along till underneath the large hammer.

This hammer was worked by an old-fashioned waterwheel, which in turn worked from the hammer pond.

When the lumps of iron came out of the oven, two men stood ready, each with a long bar of iron having cross handles at one end; the other was white hot. These they placed on the hot lump, and the first blow of the hammer welded it into a mass, and then they could turn it about to manipulate it. It was next beaten into ‘plate’ or ‘Bar’ just as was required.

This was about seventy years ago. Old Mr. Bartholomew wore a white beaver hat, swallow-tail coat, knee breeches, worsted stockings, and shoes with large silver buckles.” (Could this Mr. Bartholomew be John Bartholomew? He is said to have died in 1839 and be buried in Titchfield.)

“This old hammer mill was in an out of the way corner of the Meon River, one bank of which is in the Parish of Titchfield. The part of the stream which was kept up to feed the mill wheel is still called the Hammer Pond.

There are a few portions of the old wall of the mill still standing, and the part where the wheel was. The owner lived in a house close by; this house has been enlarged and is now occupied as a farm house. It is said to be about sixty years since the old mill was at work.”